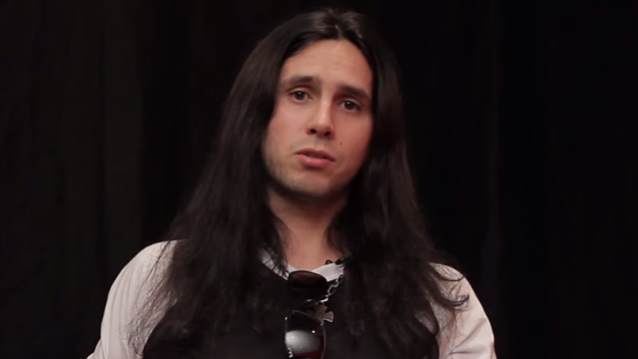 Metal Shock Finland recently conducted an interview with Greek guitar virtuoso Gus G., well known in rock and metal circles for his work as Ozzy Osbourne's guitarist and as leader of his own band FIREWIND. You can now listen to the chat at this location. A couple of excerpts follow (transcribed by BLABBERMOUTH.NET).

On his upcoming second solo album:

"I've already written all the songs and we just finished tracking drums. So, once I go back home from this tour, I'm gonna go straight back in the studio and start working hard on the guitars. So, yeah, we're aiming to finish it by summertime.”

On whether his next solo album will feature contributions from guest musicians, like his solo debut, "I Am The Fire", did:

"It will still be very much like that, but this time, [there are] gonna be [fewer] guests. It's going to be more like a close group of people that I collaborate and co-write with. I'm excited about that. It's a very high-energy album, actually. There's a lot more up-tempo and heavier stuff on it, and a lot of guitar in it. Yeah, I'm just focusing a lot on songwriting. I love to have catchy tunes on there that rock hard… It is a bit early [to talk about all the guests], but I co-wrote some songs again with Mats Levén [YNGWIE MALMSTEEN, TREAT, CANDLEMASS]. And I also wrote a lot of songs with Jacob Bunton [LYNAM, ADLER]. He also sang a song on the first album — a song called 'Just Can't Let Go'. Me and Jacob, we co-wrote a few songs this time, so he has more of a leading role on this album. He's got a great voice and he's an excellent songwriter, and so is Mats. There's a couple more people that I'm not gonna mention right now, because it's still not set yet."

On when fans can expect to hear new material from FIREWIND:

"It's hard to say, really. The reason why I haven't made any official statements on the band's web sites or anything is because I still haven't found a singer that I'm comfortable working [with] on a long-term basis yet. I'm pretty close to one right now. And also, another factor is because I need to feel really one hundred percent confident that the material is going to be killer and it's gonna be a great album. So we decided with the band there's no rush to go really back in the studio and do another album and tour cycle; we've been doing that for ten years nonstop. Right now I have some ideas that I've been working on that I'm excited about, but we're gonna start working with this new singer and then we'll see what happens, and see if he's the right one. And we'll go from there. That's why I don't really wanna say, 'Oh, 2016, there's gonna be something.' Maybe there will be, maybe not. If we're ready and we feel like it, we'll do it."