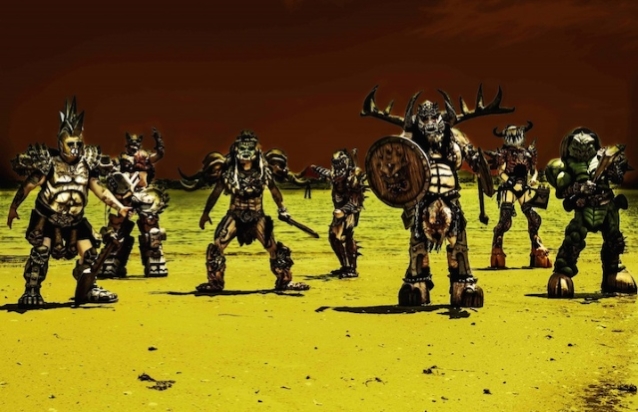 "Viking Death Machine", the new video from GWAR, can be seen below. The song is taken from the band's latest album, "The Blood of Gods", which was released in October 2017 via Metal Blade. The disc was produced, recorded, mixed and mastered by Ronan Chris "Lord God" Murphy and was made available in standard CD, 2LP colored vinyl and digital formats.

"The Blood of Gods" is nothing less than a sacred text chronicling the rise of humanity against their makers, and the massive battle between GWAR and the forces of all that is uptight and wrong with the world. Along the way, the band challenges the sins of their great mistake, from politics, pollution, and organized religion, to fast food, and factory farming. Humans are shown as what they are; a parasitic disease that must be eradicated before they suck the planet dry.

Of the "Viking Death Machine" video, Blothar has the following to say: "Humans, are you ready to ride the 'Viking Death Machine'? Our latest video is a faithful animated schlockumentary depicting my harrowing, blood-drenched defeat of the Load Warriors and the other denizens of Saturday morning raceway hijinks, including all of my fellow bandmates in GWAR. I am delighted to take my rightful place as the King of Cartoon Violence, and champion of the first annual Suck-It-Up-Butter Cup! Watch the video now! It'll make you shit."

GWAR and HATEBREED will join forces for the "Gore, Core, Metal And More" co-headlining tour this fall. Support will come from MISS MAY I, RINGWORM and AMERICAN SHARKS. These shows begin October 17 in Buffalo, New York and run through October 28 in Peoria, Iowa.

On October 29, GWAR will then kick off a headline run, that sees them stopping in New York City on Halloween and continuing their aural (not oral) devastation of the nation through November 10.