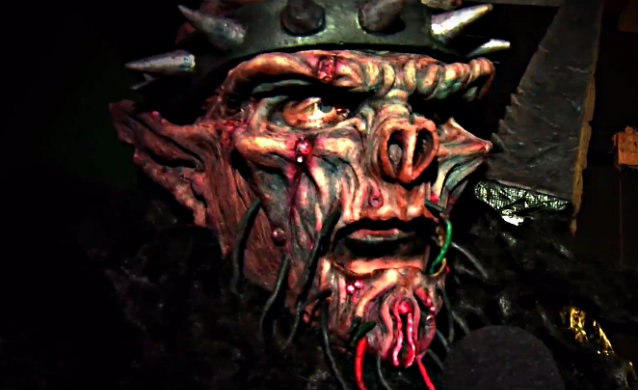 "It is with a saddened heart that I confirm my dear friend Dave Brockie, artist, musician, and lead singer of GWAR, passed away at approximately 6:50 p.m. EST Sunday, March 23, 2014. His body was found Sunday by his bandmate at his home in Richmond, Virginia. Richmond authorities have confirmed his death and next of kin has been notified. A full autopsy will be performed. He was 50 years old, born August 30, 1963.

"My main focus right now is to look after my bandmates and his family.

"More information regarding his death shall be released as the details are confirmed."

Richmond Police spokeswoman Dionne Waugh said in a statement: "At approximately 6:53 p.m. on Sunday, Richmond Police were called to a residence in the 4800 block of West Seminary Avenue for a report of a deceased individual. When officers arrived, they found David M. Brockie, 50, deceased inside the home. Detectives do not suspect foul play at this time and the Medical Examiner's Office will determine cause of death."

In a January 2012 interview with Full Metal Jackie, Brockie stated about Smoot's passing: "I think Cory's death is a big wake-up call for all of us. We all breathed a big sigh of relief when we found out it wasn't a drug overdose, to speak quite frankly. But then to think that he was 34 and died of a heart attack — it's really scary."

He continued: "Everybody out there needs to take care of themselves, especially you guys who are playing in bands and starting to get up into your 40s and you're all sitting there just like me saying, 'Holy shit, this is still going on and I can keep doing this probably for the rest of my life?' Yeah, you can, but you have to take of yourself. You really, really, really, really do. So I'm trying to quit smoking right now."