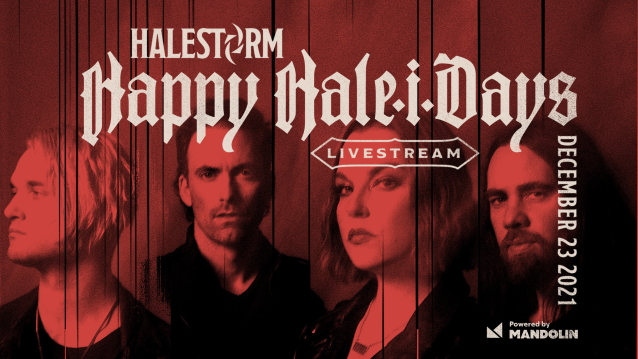 Grammy-winning hard rock band HALESTORM, which currently has the No. 1 rock song in the country with "Back From The Dead", has announced a one-night-only streamed concert on December 23. Tickets for the "Happy Hale-i-days" concert stream, recorded in September at the Brown County Music Center in Nashville, Indiana, are available starting this Friday at Mandolin.com.

Today HALESTORM also announced a second set of virtual meet-and-greets from their upcoming tour dates for fans who'd like a one-on-one experience with the band before they hit the stage, also available via Mandolin. Prior to the streamed concert on December 23, fans will also have the option to purchase tickets for a VIP Party an hour before showtime. For all details, visit Mandolin.com.

This week, HALESTORM claimed its sixth No. 1 at rock radio with "Back From The Dead". Today the band unveiled an acoustic, re-imagined version of the song.

"Back From The Dead" remains the first and only glimpse yet of HALESTORM's new album due in 2022. Rolling Stone called it "a biting, cathartic howler about overcoming obstacles — even death," and Consequence praised frontwoman Lzzy Hale's "powerhouse pipes" and lead guitarist Joe Hottinger's "blistering solo." Revolver declared it a "raucous, hard-rock rager about staying strong in the face of crushing adversity."

HALESTORM begins its final leg of 2021 touring tomorrow night with a show in Garden City, Idaho, and on Friday the band joins with EVANESCENCE to kick off the two bands' arena co-headline tour in Portland, Oregon, running through December 18 in Worcester, Massachusetts.