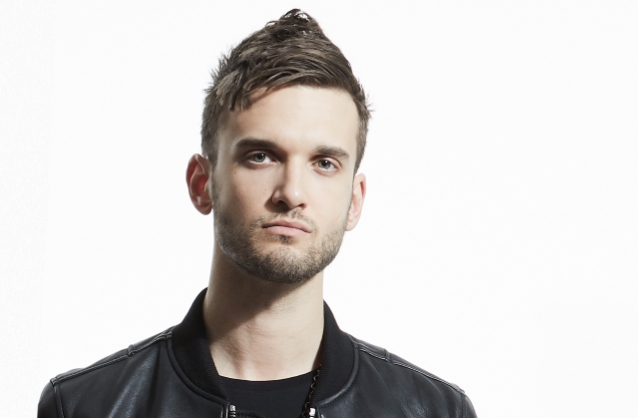 HALESTORM Drummer: 'For Us, Our Therapy Has Always Been Songwriting'

Metal Wani conducted an interview with HALESTORM drummer Arejay Hale at this year's Download festival at Donington Park in Leicestershire, England. You can listen to the entire chat below. A few excerpts follow (transcribed by BLABBERMOUTH.NET).

On what the band's latest studio album, "Vicious", means to him given the fact it explores themes of depression:

Arejay: "I think that's a really cool thing if people can take that from the album. I wouldn't say that we were going through hard times when we were writing it. We were basically just trying to write a very honest record, and try to write a record where we talk about things that we feel more confident to go a little bit deeper into subjects. Yeah, I mean, I personally, I think just like anybody, I suffer from depression every once and a while. It comes and goes. I think that's becoming so well-known. I think that by people talking about it, people are kind of now seeing, 'Oh, you're going through that? I'm going through that, too!' There's a lot of similarities. I was talking a little bit about this today, about mental health and how important it is, how there shouldn't be any shame or any kind of stigma attached to going and seeing a brain doctor. Just saying if your body hurts, you go to a doctor. If you're feeling a certain way or thinking a certain way, you should go and figure out what's going on. I've gone to a therapist. Just for the sheer fact that I want to speak to an expert who can let me know why I'm feeling a certain way or why I feel this way or that way. Sometimes I'm feeling down or this and that. Sometimes even with the touring, it can be a lot and can cause a lot of anxiety. I think just from over the years of doing this, who knows what kind of level of mental traumas we've racked up that we aren't even aware of? For us, our therapy has always been songwriting. Even when nothing really tragic is happening in our lives, it's okay to kind of feel this way or that way. It's okay to feel depressed here and there. Oftentimes, when you feel if you're in a negative headspace, a really great way to get yourself out of it is to do something creative, to create something. For me, songwriting is a big part of what keeps me centered. Without songwriting, I think I would just lose my mind. I've always been an advocate for being very open about talking about that. If you're feeling a certain darkness inside, if you get it out and put it into something creative, you're basically taking it out of yourself and putting it into something that can be made into something beautiful."

On how channeling creativity can be positive:

Arejay: "You can be creative in so many ways. As long as you can channel it into something constructive instead of destructive. I think that without thinking, in the lyrics, it comes out of us. I think for me personally, most of the songs that I write come from a very literal sense of kind of an internal battle. You're having an internal battle with yourself. I've always liked songs like that because it does put the listener in that headspace. It makes them feel like they're there when you wrote it. If you write so directly, if you really get your thoughts out in the moment when you're feeling them or when you're confused, it really helps kind of bring a lot of honesty to the songwriting. So, I think you're right, I think this album is probably our most honest to date. There's very minimal outside writers as opposed to the last three records where we had a lot of co-writing. When you're in a co-writing situation, you kind of want to still fit a format. You want to make sure that what you're writing is still poetic and clever. You want to bring that to lyrics anyway. I find nothing wrong with, for me, I'm kind of a simpleton when it comes to lyrics. I love to get creative; I love words, I love getting poetic and getting creative. I think you should get creative. I don't think you should lose sight of the really honest facts that you're trying to state when you're pouring your heart into a song. That's the power of music. A lot of people listening to it, you take from it something personal to you and it kind of speaks to you in that sense when it's not so literal. We hear a lot of people say, 'Your music helped me get through a hard time. Even though it wasn't the same situation, still if you can take something from it and it can help you get through something. That's a really powerful thing. That's the wonderful thing about music, in my opinion."

"Vicious" came out in July 2018 via Atlantic. It was recorded at Nashville, Tennessee's Rock Falcon recording studio with producer Nick Raskulinecz (RUSH, ALICE IN CHAINS, DEFTONES).

The group's 19-date summer tour with ALICE COOPER kicks off on July 17 in Allentown, Pennsylvania.