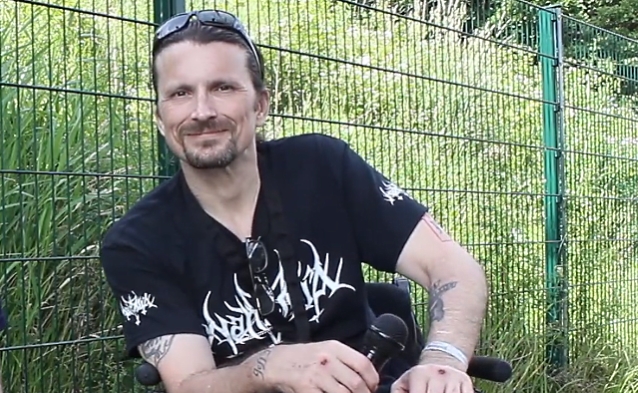 Moshpit Passion conducted an interview with frontman Jeff Becerra of Californian death metal pioneers POSSESSED at this year's Rock Hard Festival in Germany. You can watch the entire chat below. A few excerpts follow (transcribed by BLABBERMOUTH.NET).

On whether he expected such positive feedback to the band's "Revelations Of Oblivion" comeback studio album:

Jeff: "You always hope, but I think with any death metal album, just like on my first album, you never really know until you know. You prepare for the worse and you hope for the best. The feedback has been just really, really positive. It feels really good. It feels good to get myself out there on vinyl."

On why it took POSSESSED so long to record an album after reforming in 2007:

Jeff: "It didn't take long at all. We wanted to tour with the real POSSESSED lineup. We actually ended up touring three times longer than the first round. These guys are wearing the POSSESSED skin; it's very much a piece of their soul now. I wanted to make sure everyone was nailed in so we had our sound and our vibe right. Then, we were tentative about writing a new album because 'Seven Churches', without trying to flatter myself, was an iconic, cult album. Following up, I really wanted to take my time and do that right. We tried, by just having a couple of singles, and trying them out and touring on them, that seemed to fly really well. Then, we demoed, we essentially recorded the album on demo format. We shopped it around and we immediately got several offers, the best of which being Nuclear Blast, of course. So, really the lion's share of the writing was done when we got signed. It was just a matter of us spending time in the studio and doing it. It wasn't long. It was pretty quick."

On the meaning behind lead single "No More Room In Hell":

Jeff: "I've always been a fan of horror movies. It's from '78, 'Dawn Of The Dead' when you said 'No More Room In Hell', I thought, 'That's really great.' I've always liked, but I want to get heavy, it can be a light song or heavy, wherever you want to take it, according to the bible, Satan is walking to and fro on the earth, he's actually never been to hell. I kind of ran with that in a devilish way and made it heavy and fun. That was kind of our fun song. But, it's still heavy."

On whether he's proud of the various death metal scenes that spawned after POSSESSED helped coin the term in the mid-1980s:

Jeff: "It's exciting. I think that currently, death metal because of so many exciting bands, both new and old, I think it's equivalent to the golden age of jazz. It's one of the, if not the most exciting genres in music today. To the trained ear, it's going in so many different directions. There's so many flourishes and creations, to tech death metal, to the gothic, the Viking, there's just so many different kinds of death metal. There's so much to pull from on resources. It's really exciting. There's a lot of new shit under the sun."

"Revelations Of Oblivion" was released on May 10 via Nuclear Blast. The disc was recorded at NRG studios and Titan Studios with Becerra as executive producer and Daniel Gonzalez as co-producer for the album. Mixing and mastering was handled by Peter Tägtgren (HYPOCRISY, PAIN, BLOODBATH) at Abyss Studios in Sweden. For the artwork, the band enlisted Polish artist Zbigniew Bielak (PARADISE LOST, DIMMU BORGIR, DEICIDE, GHOST, GORGUTS)