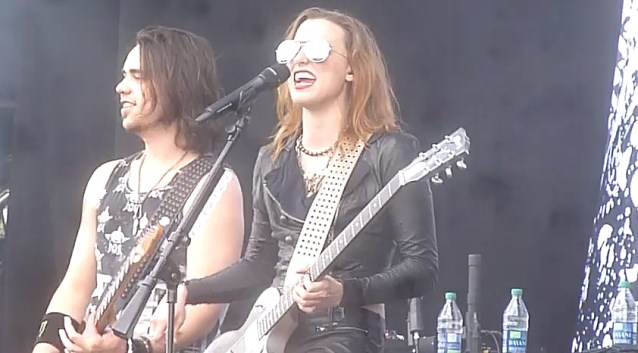 Fan-filmed video footage of HALESTORM performing the song "Freak Like Me" on August 10 at the Heavy MTL festival in Montreal, Quebec, Canada can be seen below.

HALESTORM has issued an official music video for the song "Here's To Us", the latest single off the band's 2012 sophomore album, "The Strange Case Of…" Singer Lzzy Hale told Rolling Stone, "We wrote this song literally as our personal anthem. We've been through a lot together as a band, and we've learned to celebrate the low times as well as the highs. It's about toughin' out and respecting the journey for us, and that's how we have kept it together as a foursome for 10 years! Here's to us!"

The band recently recorded an alternate version of the track featuring guest appearances from Slash, SHINEDOWN's Brent Smith, ALTER BRIDGE's Myles Kennedy, DEVICE's David Draiman and others. Hale told The Pulse Of Radio that that version of the song was all about unity in the rock scene. "Everyone always thinks everybody's in competition," she said. "'Oh, you know, we're in competition for the charts!' We're in competition like, 'Did you have a better set than me? Are you a better player?' And it was important for all of us to show that none of that matters. We're all in this together."

"Here's To Us" was previously covered on a February 2012 episode of the hit television show "Glee".

The band heads to Japan this week for two shows there before returning to the U.S. and starting a new round of late summer/early fall tour dates on August 23 in Palmer, Alaska.