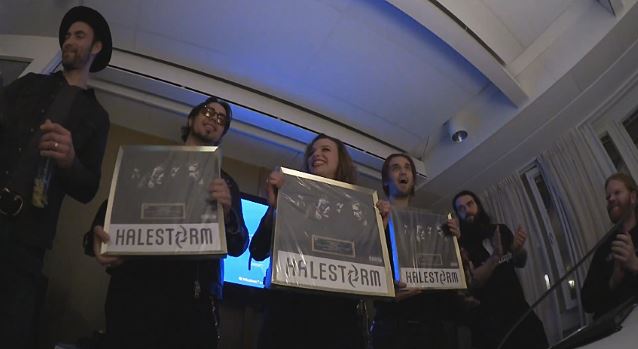 HALESTORM Lands First-Ever Gold Record With 'I Miss The Misery'

The four members of HALESTORM were presented with gold awards in Sweden earlier today for their "I Miss The Misery" single.

Video footage of the presentation (courtesy of RockSverige.se) can be seen below.

Note: The International Federation of the Phonographic Industry (IFPI) in Sweden has changed its charts to include on-demand audio and/or video song streams, which are now also counted towards the threshold required for gold and platinum certifications.

"I Miss The Misery" is taken from HALESTORM's Grammy-winning 2012 sophomore release, "The Strange Case Of…"

HALESTORM has released a new video for "Amen", taken from the group's upcoming album, "Into The Wild Life".

HALESTORM is currently on the road in Europe and will begin a North American tour with THE PRETTY RECKLESS on April 22 in Nashville.