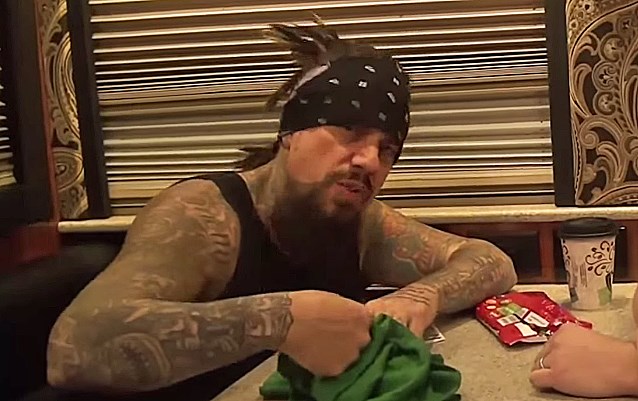 KORN's FIELDY Talks About Performing First Album In Its Entirety: 'It's Kind Of Cool'

Heavy Metal Television recently conducted an interview with KORN bassist Reginald "Fieldy" Arvizu. You can now watch the chat below.

Speaking about KORN's current tour, on which the band is celebrating the 20th anniversary of the release of the group's debut album by performing the disc from start to finish at selected shows, Fieldy said: "This is our third [show] doing the first KORN album all the way through — from beginning to end, as it goes in order. I mean, just exactly like the way you listen to it. 'Cause the more I've run into people, they're, like, 'Dude, I used to have your KORN cassette tape and it'd be in my car. I'd just listen to it over and over every day.' So, back in the day, people did that. So it's kind of cool."

Fieldy also talked about KORN's constant desire to experiment and push musical boundaries, even at the risk of alienating some of its fans.

"I think that we've always been a band to take chances," he said. "Every time we do something, we're kind of scared. We're, like, 'Everybody will be pissed off we're doing this, but we like it, so let's do it anyways.' And just taking that direction. We've done so many things… And the recent 'dubstep' KORN album [2011's 'The Path Of Totality']... On the first KORN album, we did an electronic song. We've always dabbled in all these things. It's nothing new."

The record has sold more than four million copies in the U.S. since its release.