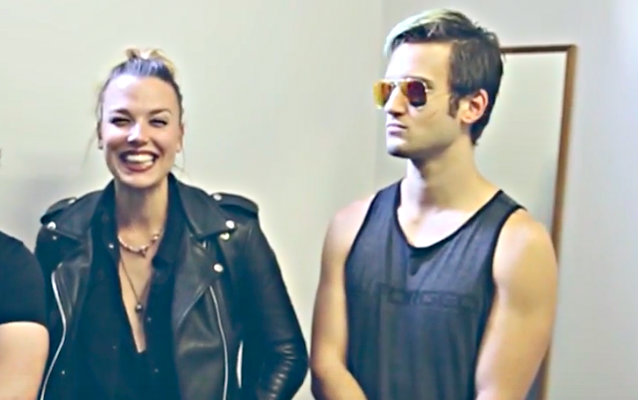 Rawkus Radio conducted an interview with HALESTORM frontwoman Lzzy Hale and drummer Arejay Hale when the band played in New Zealand this past January. You can now watch the chat below.

Asked what piece of advice they would give to bands that are just starting out, Lzzy: "Number one is absolutely do it because you love it. Don't do it for any other reason. We've seen so many bands just crumble because their idea of success is money or getting people to know you and all this stuff.

"We're all perpetually, like, 14 inside; we haven't really grown up. And we still get that same feeling right before a show, and it's like we're 14 again. And it's because we love it. It has nothing to do with any of the petty things."

She continued: "Play your instrument, practice, play in front of us many people as you can — anywhere they'll let you play.

"When we started out, our first gigs were in coffeehouses where the rule was you had to be quieter than the cappuccino machine. It's really crazy.

"And then, really, just find people that you love and that you're willing to live two feet from each other.

"And probably another thing too: we tell a lot of young bands that are just starting out, it's about the journey; there is no real end to it. It's about continuing. So even though, like, okay, this is cool, we've been a band for a long time, we've had some success, but there's always something next."

Added Arejay: "I get this question a lot: When was the moment you realized you made it? And it's been such a long and steady thing, we're just continuing, we just keep going. And I see a lot of bands, they get close, or they get signed by a label or they get dropped or it doesn't quite work out and they just kind of give up or fizzle out. But you never know what opportunities are right around the corner. So another good piece of advice for upcoming bands is, hey, it's gonna take a long time — it's gonna take a long, long time. And that's why you've gotta love it, because you're gonna put that drive behind it, and you've just gotta outlast 'em all, pretty much."

Lzzy recently told Swedish outlet RockSverige that HALESTORM is continuing to write material for its next album, tentatively later this year.