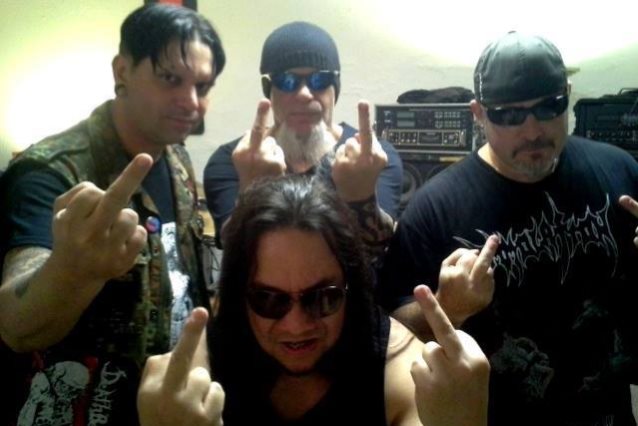 Back in December, Lee and guitarist Rick Rozz DeLillo — after trading verbal barbs and taunts for many years — announced that they were rejoining forces in a revamped version of MASSACRE, dubbed MASSACRE X (the "X" was said to represent the band's tenth lineup). The main objective of the group — which also features Rozz's THE END bandmates Michael Grim (bass/vocals) and Mike Mazzonetto (drums) — was said to be "to rekindle the sound, style, aggression, and passion that originally elevated MASSACRE to cult status in the death metal scene two and a half decades ago."

Within a couple of days of Lee and Rozz's announcement, former MASSACRE drummer Bill Andrews — who moved to Japan in the early 1990s — released a statement saying that he did not approve of this latest attempt to reform MASSACRE and threatening legal action if Rozz and Lee moved forward with their plans.

In a brand new interview with Metal Rules, Lee explained that he and Rozz "patched things up" after a long-standing rift and insisted that "we get along great now." He went on to paint a bleaker picture about his relationship with Andrews and ex-MASSACRE bassist Terry Butler, noting: "Right now there is so much controversy behind the band name. It's disgusting. It's pathetic. And we are in so much legal stuff right now. It's the same thing that a lot of bands have gone through — VENOM and VENOM INC.; ENTOMBED and ENTOMBED A.D., etc. We are in a similar battle right now."

He added: "I'll just tell you this and you can put it on the record. It's going to come out anyway. They know that Rick and I got back together in November and started talking. On December 12th, we announced on Blabbermouth that we are going to do MASSACRE again. On December 16th, Terry Butler and Bill Andrews put a counter release out saying that they won't allow us to use the name because it is trademarked. We went to the trademark site to look it up. They applied for the name three days after we did our announcement on Blabbermouth. We've had lawyers look into it. They have applied for a trademark, [but] they don't have it yet. That's all I can tell you right now. We are calling our band MASSACRE X."

Earlier in the month, Butler — who is now playing bass for OBITUARY — told Metal Wani that Rozz and Mazzonetto "destroyed" MASSACRE with their "behind-the-scenes backtalking and backstabbing." He went on to make it clear that Rozz and Lee's new band "cannot be called MASSACRE." He said: "They can do all they want and write all the songs in the world they want, but it's not gonna be called MASSACRE."