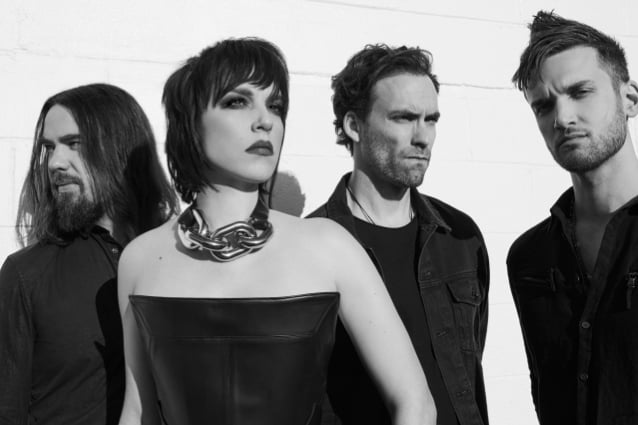 HALESTORM Singer On Whether Rap Artists Are New 'Rock Stars': 'Unless You're Underground With Us, You're Probably Not'

Last December, BRING ME THE HORIZON frontman Oli Sykes rekindled the debate over the so-called decaying current state of rock music, echoing the sentiment of the mainstream that rap artists are the new "rock stars" based largely on their flamboyant lifestyles and oversized fanbases. "Rappers are almost the new rock 'n' roll or punk or whatever," he said. "Rock's gone soft, it's gone miserable and boring, there's not really much exciting about it."

In an interview with Kaaos TV prior to HALESTORM's appearance at this year's Tuska festival in Helsinki, Finland, frontwoman Lzzy Hale and guitarist Joe Hottinger were asked about their take on Sykes's comment.

"I don't know," said Lzzy. "I think personally, whether you're a rap star, a pop star or a country star, everybody wants to be a rock star. It doesn't mean you are. But…"

"It depends on your definition of a rock star, too," added Joe. "They definitely make more money. Rock is a little underground right now, which I love it. We're down here simmering, and there's some really cool music happening, and [there are] fans all over the world that stick with you forever, [whereas] these pop things happen and it's vapid. A band goes up and it comes down real fast 'cause people just move on to the next thing.

"It's the only way we've ever known," he continued. "We weren't operating in a time like the '80s and '90s when rock was at the top of the charts and [was] the biggest thing happening. Now it's… it has been — whatever. All the money is over there, and that's fine. They can have it. We have a really cool thing going on here in rock and roll, and I like it."

Lzzy said that people who go to rock shows are often there for the experience rather than as an excuse for something to do on a Saturday night. "They're not there to show off their cute outfits and take selfies; they're there because it's a part of their life," she said. "And some of these kids primally need to be there to make themselves feel like they belong somewhere. And I think that that's powerful. So we're very proud of that."

She added: "Like I said, everybody wants to wear the leather jacket and be a rock star, but, really, the truth is that unless you're underground with us, you're probably not. [Laughs]"

The group's 19-date summer tour with ALICE COOPER kicks off on July 17 in Allentown, Pennsylvania.