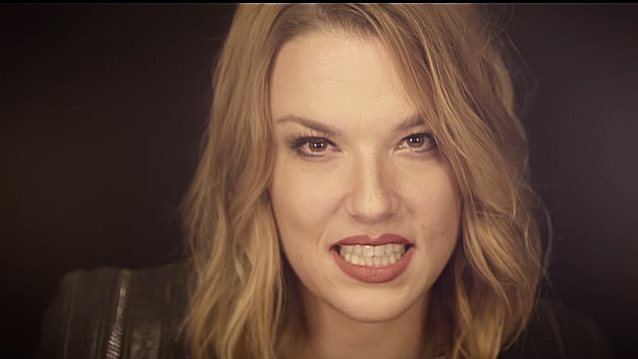 HALESTORM has unveiled a powerful new video for the song "Dear Daughter" from the band's latest full-length album, "Into The Wild Life".

"I'm hoping that through this song, I can spread the inspiration and empowerment that has been instilled in me," said HALESTORM lead singer Lzzy Hale about the clip. "Carve your own path, ladies (and little gents too). I'm living proof that nothing in life is impossible."

To celebrate the video launch, Lzzy will perform "Dear Daughter" for fans today via the band's Facebook page at noon Eastern.

In honor of Mother's Day, HALESTORM is encouraging fans to post photos of their mothers and/or daughters with their own stories of encouragement and the hashtag #DearDaughter.

In an interview with RockSverige.se, Lzzy stated about "Dear Daughter": "This is a subject that… I mean, obviously, [HALESTORM drummer Arejay and I] grew up with a very supportive mother. We decided to start a rock band, and she actually said, 'Yes! Do that! Go for it!' So, for me, this was… We get to speak to a lot of young girls, and a lot of them do have those supportive parents, but a lot of them don't. So I think this was my way — lyrically, at least — just passing that on… As in, like, if I were… if and when I were to have a daughter, I would be passing these words on to her… I don't know… It's a strange song."

Added bassist Josh Smith: "It's a strange song, but [with] a great message. And although it says 'Dear Daughter', that's just great advice for anyone… be it a young kid, or anyone in a spot where they're, like, 'Man, I'm in just the pits right now. What the hell's my life gonna be like in ten years?' So it's just good sound advice for anyone kind of trying to find their way."

Lzzy told Swedish outlet RockSverige that HALESTORM is continuing to write material for its next album, tentatively due later this year.