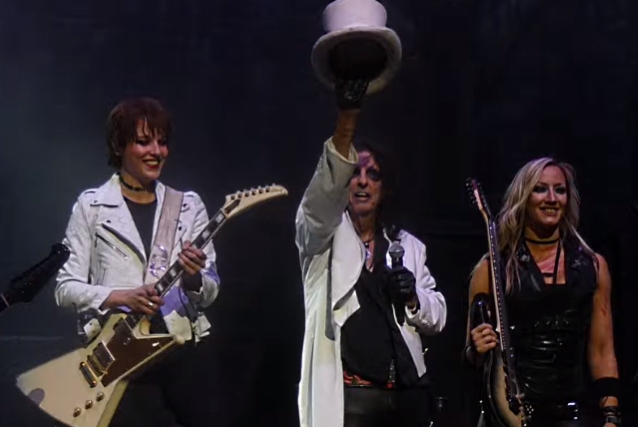 HALESTORM's Lzzy Hale joined Alice Cooper on stage last night (Wednesday, July 17) at PPL Center in Allentown, Pennsylvania at the opening show of the two bands' joint U.S. tour to perform the Cooper classic "School's Out". Fan-filmed video footage of her appearance can be seen below.

After the concert, Cooper guitarist Nita Strauss shared a few photos from the gig on her Instagram and wrote in an accompanying message: "HOLY FIRST NIGHT OF TOUR!!!! Does not get any better than sharing the stage with the incomparable @officiallzzyhale... not just a beauty with a monster voice, but commanding stage presence, infectious energy and vibrato that brings grown men to their knees!!!! Here we are obviously not having any fun at all during School's Out last night All [photos] by @judyhwon (I got a little star struck seeing her in the photo pit because I'm such a huge fan of her work!!) #alicecooper #halestorm #motionlessinwhite #lzzyhale #OlBlackEyesIsBack"

A couple of months ago, Hale said that she was "so excited" at the prospect of touring with Alice. She said: "We're ticking that off the bucket list. We've done a couple one-off shows with him over the years, and we've gotten to know him and his family, but this is the first time we’re on a full-fledged tour with him."

She went on to talk about what Cooper means to her on a personal level.

"Alice Cooper was the reason that I found out I was not cool when I was a kid," she said. "My parents moved to a new place when I was 11 years old. At this point in time, I loved Alice Cooper. I loved DIO and BLACK SABBATH and DEEP PURPLE, VANILLA FUDGE, that kind of thing. Moving to a new place, don't know anybody there, a couple of neighborhood girls invite me to a sleepover. They're, like, 'Bring some of your favorite CDs. We're going to listen to everybody's favorite music and do each other's makeup,' that whole thing.

"I'm 11 and I end up bringing to the sleepover Alice Cooper's 'Love It To Death' and DIO's 'Holy Driver'. This is '96 so this is TLC, BACKSTREET BOYS, that kind of thing. They're playing 'Waterfalls' and there's a bunch of other things going on. 'Oh, let's listen to Lzzy's CD.' Put in the Alice Cooper CD. We didn't make it past the first chorus. They're, like, 'Let's put another CD back on.'

"I remember going back home and Dad was, like, 'How was the sleepover?'" she continued. "I'm, like, 'It was fun, but they didn't like my music.' Dad's, like, 'That's good.' I'm, like, 'Why is that good? They don't like my music.' He's, like, 'They like all of that music because it's on the radio and people in school think you're supposed to like it. You love this CD — you love Alice Cooper — because you really love it. It's a part of you.'"

Cooper's tour with HALESTORM will conclude on August 16 at BB&T Pavilion in Camden, New Jersey.