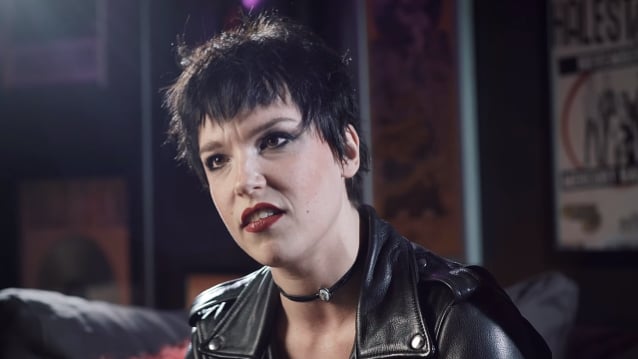 HALESTORM's LZZY HALE: 'Nowadays Girls Are More Encouraged To Do What They Want To Do'

The latest episode of Ernie Ball's "String Theory" featuring HALESTORM's Lzzy Hale and Joe Hottinger, can be seen below.

Ernie Ball's "String Theory" is a web series from Ernie Ball that explores the sonic origins of some of music's most innovative players.

In this episode, Lzzy and Joe discuss their beginnings with guitar, their love of playing, and their relationship with Ernie Ball.

"I think it's important for everyone to find that thing," Lzzy said. "Nowadays I think that girls are more encouraged to do what they want to do and what they desire to do.

"I grew up in a household where we didn't even really talk about the whole 'class ceiling' thing," she continued. "It was just, like, 'If you wanna be a mechanic or a doctor or a rock star or a rodeo clown, or whatever, you can totally do it.'

"It's like three different lifetimes that I've lived as far as the girl [playing music]," Lzzy added. ' The beginning was total naïveté, and I had no idea that that it's kind of weird thing to be a girl in rock music. That kind of almost 'blinders-on' mentality meant I just kept moving forward and I didn't pay any attention to it. So, you loading your equipment, and people are, like, 'Oh, my girlfriend never carries my guitar for me' — you know, that kind of stuff. And then, I remember early on, we used to start out just with me — just me up on stage — because no one's gonna expect just a girl to walk out on stage at a rock show. And then you get to this middle section where you're being shopped around to labels and there's a lot of, 'Well, we love what you do, but we can't do anything with you, because women on rock radio, that's not really a thing.' So then you get this whole defiance [which] becomes your fire: 'That's ridiculous. I'm gonna do it anyway.' So then you keep moving. And then it's really great, right now, to be on this kind of third tier of that, whereas you can be on stage and look at all of these girls and just see them just get it. They're looking on stage, like, 'Yes. Absolutely. This is possible.' Just remembering what it was like to be, like, 'Oh, look. There's the North Star. There's the light at the end of the tunnel. It's possible to do this.'"