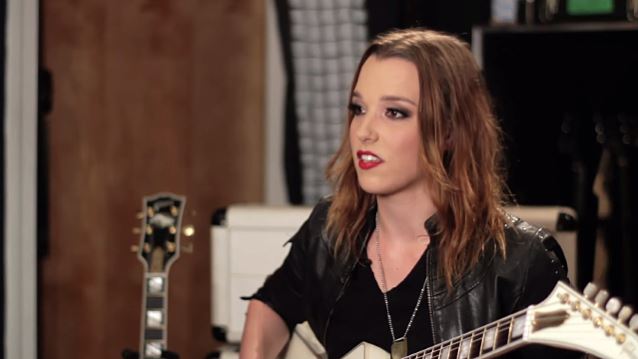 In a brand new interview with HNGN.com, HALESTORM frontwoman Lzzy Hale was asked if she feels there is a double standard with there being many "Hottest Girls Of Rock"-type lists while we don't see a lot of similar lists featuring men.

"You might be talking to the wrong girl, but I grew up with my parents' music, so I grew up with a lot of '70s, '80s hard rock and metal and would end up getting these, like, old prints and old magazines, videos — this is during the '90s — from my parents' friends and people that I kind of reached out to in Pennsylvania," she said. "I loved bands like CINDERELLA and I loved VAN HALEN and BLACK SABBATH and DIO and all that stuff… THIN LIZZY, ALICE COOPER… The list goes on.

She continued: "Really, my view of this has always been that sex and rock 'n' roll go hand in hand, because, really, if you think about the '80s, there was a whole lot of guys that had the magazine cover or the poster of them like with half their shirt ripped and stuff, so that definitely had its place. I think it's just a generational thing right now, where the guys are a little shy and don't necessarily want to take their shirts off, but ya know, it'll get there. [Laughs]"

Hale added: "Maybe some of my peers will disagree with me, but, really, like I said, sex and rock 'n' roll go hand in hand, and that's a personal preference for you. No one has ever come up to me, thankfully — and that's probably because of our 'foremothers' of rock 'n' roll had to go through a lot of crap so I could have it easy — but I've never actually been approached in any photo shoot; not by label, not by management. No one has ever been, like, 'Hey, can you like dress sexier, or can you like go without the shirt for this?' Anything I have done has been purely because I wanted to do it. So I feel lucky being that way, but my rule is it can't start and end with just the high skirts and the high heels. You have to have something to back it up.

"Again, my encouragement to anybody is do what you want to do, but if you're going to be in music, don't just be the long legs. [Laughs] Make sure that you work very hard at your instrument and your band."

HALESTORM's third album, "Into The Wild Life", follows up 2012's "The Strange Case Of…" and is already being described as the band most diverse and adventurous record yet.