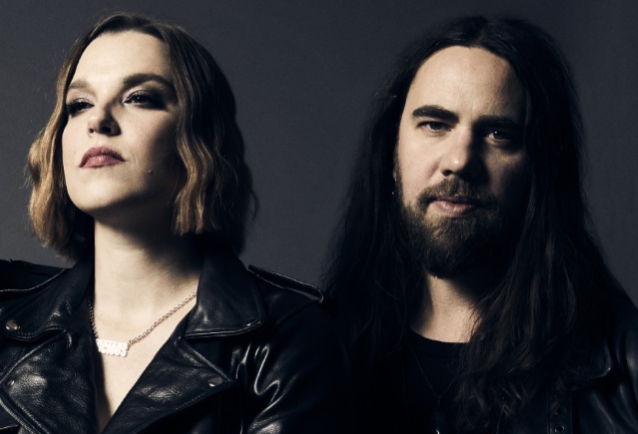 HALESTORM frontwoman Lzzy Hale has shared a sweet message of love and devotion to her partner and bandmate of 18 years, HALESTORM guitarist Joe Hottinger.

On Saturday (October 2),Hale took to her Instagram to share a black square with the date "October 2nd" on it, and she wrote in an accompanying message in part: "On this day, 18 years ago. I kissed you. I opened a door that changed my life forever. I found a light, a partner in crime, a love.

"To truly love someone, is not easy. To grow and evolve with someone is not easy. But you and I, we never run from 'Hard'. You've seen my dark side, you know my secrets, my flaws, my vulnerabilities. I challenge you. You push back. But somehow our belief in each other has never wavered, even in the storm we are the rock that remains.

"I love you more than those 3 archaic words could possibly express. And I know no matter what this fucked up world lays at our door. I know someday the moon will blow away and all flesh will decay. Everything will change but we will still remain and outlast the pyramids."

In April 2020, Lzzy was asked by a fan on Twitter when she and Joe were getting married. Lzzy responded: "I truly have never had the desire. Personal preference. Technically I was asked, have a ring passed down that my SO [significant other] was given from my dad. But I'm living a #newmodernlove".

That same year, Lzzy was asked in an interview if she fiound it difficult to maintain a relationship while on the road. Hale replied: "In a relationship, you have to literally have everything out there to this other person, and they have to do the same thing with you, or it's not gonna work. I've never been a jealous person either, and as of right now, I'm dating someone who is the same way. So we have a very amazing trust thing going on."

HALESTORM recently returned to the studio in Nashville, Tennessee to resume recording its upcoming follow-up to 2018's "Vicious" album, tentatively due in early 2022 via Atlantic.

In August, HALESTORM released a new single called "Back From The Dead". The video for the track, directed by Dustin Haney (Noah Cyrus, Luke Combs) and produced by Revolution Pictures, features Lzzy and the rest of the band in a morgue and cemetery somewhere between life and death.

HALESTORM's new music is once again being produced by Nick Raskulinecz, who first helmed the band's 2017 effort "ReAniMate 3.0: The CoVeRs eP" and was previously described by Hale as the group's "fifth member."