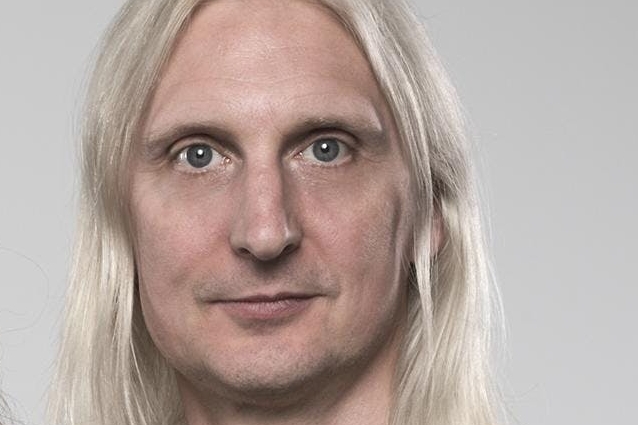 HAMMERFALL's OSCAR DRONJAK: 'You Can't Have A Metal Concert With A Seated Audience'

Guitarist Oscar Dronjak of Swedish metallers HAMMERFALL spoke to Barbara Caserta of Italy's Linea Rock about what the touring circuit might look like post pandemic. He said (see video below): "We're hoping that things will get back to normal soon enough. I don't know what it'll take — probably a vaccine, I guess — to make sure that the virus don't spread at the concerts.

"It's still strict rules and regulations in Sweden as well, or live music and sporting events and stuff like that. They just today, actually, raised the level from 50 people to 300, but that is seated audience only, for sporting events as well as music, and also at least one meter or whatever distancing between the seats — unless you went there with your wife or something, then you can sit together, of course. But for people you don't know, there's gotta be some distancing, like a meter or a meter and a half or something. So for a lot of the sports teams, they get some reprieve now a little bit at least. It's not much, but it's better than 50 anyway. But as far as metal concerts and stuff, you can't have a metal concert with a seated audience; it's ridiculous. And not just that — you need to have at least a part of the people in front so you get that vibe and back-and-forth that I think is absolutely vital for a heavy metal concert.

"For the future, we're trying to make things happen, but right now, the next thing that we've got going is June, the festivals in Europe, and I'd say right now, it's about 50-50 chance that it'll happen," Oscar added. "They're booked and everything, but I doubt that they will be able to go through with all of them. I think that's gonna be really, really difficult. So we'll see what happens after that.

"You could be angry about it or sad about it, and, of course, it sucks ass, but what are you gonna do? There's nothing anybody can do about it. You just have to accept the fate and do whatever else you can do — live your life as best as you can in the meantime. That's what we're trying to do."

HAMMERFALL released a new live set, "Live! Against The World", on October 23 via Napalm Records.

HAMMERFALL's latest album, "Dominion", was released in August 2019 via Napalm. For the disc, HAMMERFALL re-teamed with James Michael to do vocals at Red Level Three studios, and Fredrik Nordström of Studio Fredman at Castle Black Studios for the instruments.