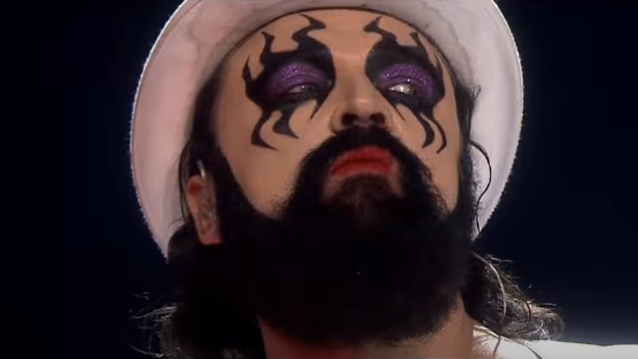 The manager of former TURBONEGRO frontman Hank Von Hell has shot down speculation that the singer took his own life.

The Norwegian musician, whose real name was Hans-Erik Dyvik Husby, was just 49 years old when he was found dead in Slottsparken, a public park in the center of Oslo, on Friday, November 19.

Boye Nythun, who was also Husby's best friend, told Norway's Se Og Hør: "In recent days, we have seen and observed a lot of rumors about Hans-Erik's death. I can deny that Hans-Erik took his own life. Hans-Erik had optimistic plans for the future and much to look forward to.

"It was no secret that Hans-Erik has lived a hard life at times. He has also been open about this before. The last few months have been extra hard for him, and unfortunately the sum of a hard-lived life became too much for him. Hans-Erik's body could no longer stand it. He was found in Slottsparken. His body had simply said 'stop.' It is tragic, and now we ask for peace.

"We will not say anything more about the case, but [we have decided to go public] with this [information], so that we avoid more speculation and rumors."

After forming in the late 1980s in Nesodden, Norway, TURBONEGRO recorded four well-received albums and toured extensively before breaking up in 1998, citing Von Hell's heroin addiction as the cause. A four-year hiatus following during which Von Hell checked into rehab. A 2002 one-off appearance at Norway's Quart Festival led to the band's first new album in five years, 2003's "Scandinavian Leather". Two more reunion albums followed, including 2007's "Retox", after which Von Hell left TURBONEGRO and formed a new band, DOCTOR MIDNIGHT & THE MERCY CULT.

In 2018, Von Hell released his first solo album, "Egomania", and followed it up with last year's "Dead".

Most recently, Hank contributed guest vocals to the song "Black Hearse Cadillac" on the latest album from ME AND THAT MAN, the band led by BEHEMOTH frontman Adam "Nergal" Darski.