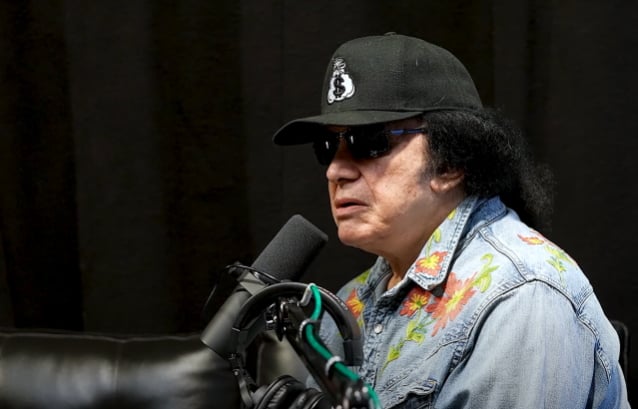 Has GENE SIMMONS Experienced Any Anti-Semitism As A Member Of KISS? He Responds

KISS bassist/vocalist Gene Simmons is the featured guest on "Howie Mandel Does Stuff", the podcast co-hosted by the comedian and his daughter Jackelyn Shultz. You can now watch video of Gene's appearance below.

Simmons, who was born as Chaim Witz in August 1949, at Rambam Hospital in Haifa, Israel, to Jewish immigrants from Hungary, was asked if he ever experienced any of the anti-Semitism that his bandmate Paul Stanley, a fellow Jew, wrote about in his 2014 memoir, "Face The Music: A Life Exposed". He responded (as transcribed by BLABBERMOUTH.NET): "A little bit. It's not like being black or Hispanic, because sometimes you can hide behind, 'Oh, I'm Italian' or 'I'm Greek'; Jews have that ability. But basically… I was born Chaim Witz, and I understood that that didn't work — I did. I realized for myself that in order to succeed, I've gotta be a chameleon of sorts. Basically, dress British, think Yiddish. Yeah, you're Jewish. That's fine. Shut the fuck up. Nobody's interested.

"For a long time, I never talked about [my family's Jewish origins] because it wasn't the point," he explained. "I'm sharing the planet with everybody else, and all the differences we think we have with each other, when that first alien comes down, they won't have a clue what you're talking about. 'I'm from Serbia.' 'Oh, yeah. Well, I'm from Zimbabwe.' And the alien says, 'Yeah. So? You're all Terrans,' like from Terra Firma. 'You're all Terrans.' Well, and then you die. That's all there is."

In "Face The Music: A Life Exposed", Stanley accused fellow original KISS members Ace Frehley (guitar) and Peter Criss (drums) of anti-Semitism. Paul wrote in the book that Frehley owned a collection of Nazi memorabilia, and that some of his earliest memories of Criss involved the drummer racially mocking waiters at Chinese restaurants. Furthermore, Stanley claimed that Frehley and Criss resented him and Simmons for controlling the band's creative output — which Stanley says stemmed from the fact that Frehley and Criss's songwriting contributions "just didn't amount to much."

"Ace and particularly Peter felt powerless and impotent when faced with the tireless focus, drive and ambition of me and Gene," Stanley wrote. "As a result, the two of them tried to sabotage the band — which, as they saw it, was unfairly manipulated by [us] money-grubbing Jews."

Stanley later reiterated to the New York Post that he did in fact believe that Frehley and Criss are anti-Semitic.

"Yes, I do," Paul said. "It's based on years and years of interactions. It's not pulled out of thin air."

"If you wanna hang your inadequacies or your failures on somebody, it seems that, 'Hey, it's his fault.'

Criss has denied that he is a raging anti-Semite, telling TMZ.com that he supports all religions and that his favorite aunt was Jewish.

During an appearance on an April 2014 episode of SiriusXM's "Trunk Nation With Eddie Trunk", Frehley responded directly to Stanley's allegations, saying: "They can't call me a drunk or a drug addict anymore, so they're grasping at straws. I mean, Jesus Christ! My fiancée is Jewish. How can I be anti-Semitic? Is he out of his mind. [Laughs] [I've spent] 40 years in the music business [and] I've worked alongside Jewish people my whole life. And I'm anti-Semitic? It's ridiculous. I think he's trying to sell his book, and it's a pretty sad commentary if he has to resort to verbal slurs and innuendo. It's ridiculous."