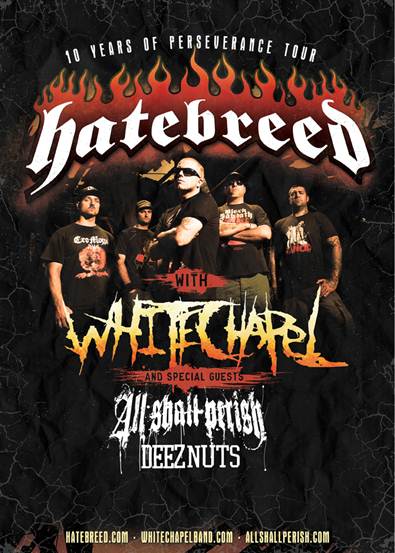 Connecticut hardcore/metal masters HATEBREED have announced the "10 Years Of Perseverance" fall tour, a United States headline tour to commemorate the 10th anniversary of the band's 2002 major-label debut, "Perseverance". The trek will feature direct support from WHITECHAPEL and special guests ALL SHALL PERISH and DEEZ NUTS, and kick off on September 13 in Clifton Park, New York. Tickets go on sale to the general public on Friday, June 8. In addition, an exclusive pre-sale will begin on Wednesday, June 6. HATEBREED will also be offering an exclusive VIP Diehard Package that includes a meet-and-greet, commemorative diehard laminate, poster and more! Make sure to head over to www.hatebreed.com/VIP for all ticketing and VIP Diehard details.

"Perseverance" is recognized worldwide as a landmark album in HATEBREED's musical catalog — an album that skyrocketed the band to immediate leader-of-the-pack status. Released on March 26, 2002, the band's second full-length studio album blasted open the doors of American DIY hardcore in mainstream culture with songs such as "I Will Be Heard", "A Call For Blood" and the album's title track, "Perseverance". Since the release of "Perseverance", the fusion of hardcore and metal has been emulated and evolved relentlessly, but never duplicated with the same originality and brutality that HATEBREED accomplished with their first major-label release.

"Perseverance" debuted within the top 50 of The Billboard 200 chart and has since gone on to sell roughly half a million copies worldwide.

HATEBREED with WHITECHAPEL, ALL SHALL PERISH and DEEZ NUTS:

Regarding the musical direction of the new HATEBREED material, vocalist Jamey Jasta told "Maximum Threshold", "We did enough experimenting, I think, on the last record… A lot of people really liked that record and it did gain us a lot of new fans, but on this record, with the 10-year anniversary of [HATEBREED's 2002 album] 'Perseverance' and with Wayne [Lozinak, guitar] being back in the band — this will be his second record with us — it's just fun to kind of keep with the old-school influences. I hear more CRO-MAGS and KILLING TIME and SHEER TERROR and OBITUARY and BOLT THROWER and SLAYER and ENTOMBED and those kind of '80s and '90s influences in there. Which is fun for us, because we emulate the bands that we love. We try to make it our own sound and make it our own style, but at the end of the day, we're just fans of those styles of bands."

The self-titled album from HATEBREED sold 15,000 copies in the United States in its first week of release to land at position No. 37 on The Billboard 200 chart.

HATEBREED's previous collection of new material, "Supremacy", opened with around 27,000 copies back in September 2006 to land at No. 31. This number was roughly in line with the first-week tally registered by its predecessor, "Rise Of Brutality", which shifted more than 32,000 copies back in November 2003 to debut at No. 30.

HATEBREED's covers album, entitled "For The Lions", sold around 10,000 copies in the United States in its first week of release back in May 2009 to debut at position No. 58 on The Billboard 200 chart.

"Hatebreed" was released in North America on September 29, 2009 via E1 Music (formerly KOCH Records). The effort was made available on CD, digital download, vinyl and special edition with a bonus 65-minute DVD. "Hatebreed" was issued on Roadrunner in all other territories.