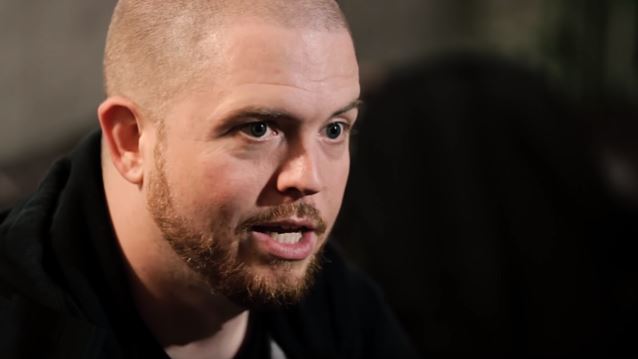 In a recent interview with Exclaim!'s Aggressive Tendencies, HATEBREED frontman Jamey Jasta was asked to name the high points of the band's career so far. He said: "If I had to discuss specific highs of our career, I would say everything has been in the last couple of years. The best times are now. I'm very grateful of what's going on now."

He continued: "Last year, we did two stadium shows in Germany with METALLICA. James [Hetfield, METALLICA frontman] comes out and says, 'I wanna get a picture with the four singers' — me, Chuck Billy [TESTAMENT] and Zetro [Steve Souza] from EXODUS and James. And I thought, 'I'll go home now and retire. I don't have to ever tour again.' There you go. 'Cause, like, [these are] three guys who I had posters of on my wall."

Jasta added: "I remember staying up, seeing EXODUS videos on 'Headbangers Ball'. I remember going to see TESTAMENT… I was going to TESTAMENT shows on 'Demonic'…. In the mid-'90s and late '90s, on 'The Gathering', when it was in a slump, when thrash was long forgotten. I actually booked EXODUS with Paul Baloff at multiple shows on the reunion, on 'A Lesson In Violence', so then when Zetro rejoined the band, I was psyched. And then METALLICA, obviously… I mean, I physically fought people over the 'Black Album.' So I told Lars [Ulrich, METALLICA drummer] and James when I saw them, 'Who else is opening for you that would physically defend your honor?'"

Jasta spoke in more detail about the physical altercation over METALLICA's self-titled 1991 album during a recent interview with Pete Bailey. He recalled: "I remember the 'Black Album' came out. That was my first CD, one of my first CDs that I bought. And I had the long box. I took the bus down and I got it. And then this kid was talking shit — like, this older metalhead dude was talking shit — and I grabbed him and I had to hit him. I had to defend METALLICA. I've gotta tell James… I think I might have told Lars. I've gotta tell James that: 'Hey, next time you take one of these bands on tour, ask them if they've ever physically fought to defend your honor.' [Laughs]."

HATEBREED's latest album, "The Concrete Confessional", was released on May 13. The CD was produced and mastered by longtime collaborator Chris "Zeuss" Harris (ROB ZOMBIE, SUICIDE SILENCE, WHITECHAPEL) and mixed by Josh Wilbur (LAMB OF GOD, MEGADETH). Artwork was created by Marcelo Vasco (SLAYER).