Connecticut hardcore/metal masters HATEBREED released their first full-length, the modern hardcore classic "Satisfaction Is The Death Of Desire", back in November of 1997. The album set the tone for the type of moshable metal that would eventually go on to define the '00s.

2002's "Perseverance" was a perfectly executed, packed-with-anthems follow-up that has become emblematic of the era. In fact, the album's iconic and lyrically uplifting track "I Will Be Heard" has become the band's signature battle cry, securing its place as the quintessential, fist-in-the-air chant of the new millennium, thanks to a call-to-action that starts with "Now is the time for me to rise to my feet…"

In the twenty years since their definitive debut, HATEBREED have rightfully earned their status as hardcore legends. They've remained road warriors, touring constantly and reducing venues to pile of rubble and ash while sharing stages with everyone from SLIPKNOT to SLAYER and serving as one of the top-tier headliners on multiple festivals, from Ozzfest to Mayhem to Warped Tour.

The band will embark on a headline tour this fall, celebrating twenty years of "Satisfaction Is The Death Of Desire" and the fifteen years of "Perseverance" by playing a majority of songs from both albums, along with other fan favorites from across the entire HATEBREED catalogue.

Tickets go on sale on Friday, August 25. Tickets and VIP packages will be available here.

HATEBREED singer Jamey Jasta said: "Sometimes it's good to look back just to see how far you've come. There's about four-five songs off of 'Satisfaction Is The Death Of Desire' and about six or seven off of 'Perseverance' that we rarely play, so we've hit the rehearsal room and dusted off a killer batch of songs and deep cuts that we'll blast your eardrums with this fall. Come celebrate not one but two anniversaries with us!" 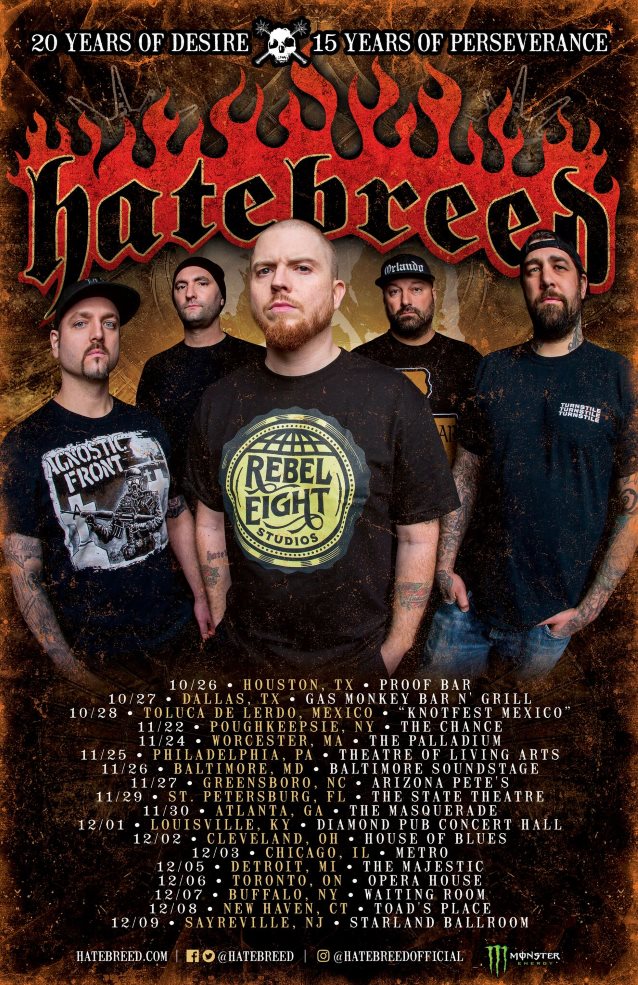