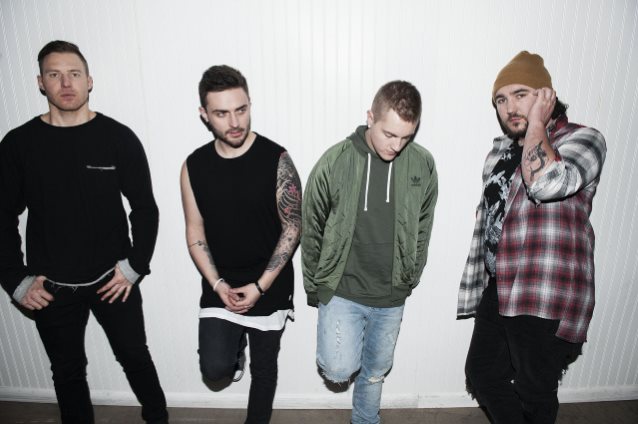 I PREVAIL Releases Video For 'Lifelines'

I PREVAIL has released a new video for "Lifelines", the title track from the band's debut LP. The clip was shot in Detroit at the Downtown Boxing Gym Youth Program, an organization which uses boxing to help at-risk youth with educational tutoring and discipline. Singer Brian Burkheiser told The Pulse Of Radio how the song itself sums up the themes of the album. "It's just those defining moments in your life where the path goes one way and you can't look back, and for better or for worse you're a different person coming out of whatever experience that is," he said. "I think it's just kind of us expressing those emotions through that song on everything that's happened to us. But we try to do it in a relatable way where people who are going through different things, whether it's a divorce or a loss of a loved one or whatever it is, you know, you can hone in on that emotion with that song."

Burkheiser said about the video: "We set out to create something that embodied what 'Lifelines' as a song and as an album really meant to us. It centers around the harsh reality that life doesn't care about what you have planned. The biggest moments, whether ones of amazing opportunity or painful loss, are coming no matter what. How you choose to respond makes you who you are."

I PREVAIL recently announced a massive fall headlining tour. The pro wrestling-themed "Rage On The Stage" trek will begin on September 20 in Oklahoma City and may end up hitting as many as fifty different cities before grinding to a halt on December 2 in Des Moines, Iowa. Support on the road trip will come from WE CAME AS ROMANS, THE WORD ALIVE and ESCAPE THE FATE.

Since the Detroit rockers formed in 2013, I PREVAIL has become impossible to ignore over the past year. Last week's announcement of "Rage On The Stage" follows their massive run on this summer's Vans Warped Tour, during which the band played the Journey's Left Foot Main Stage. Propelled by the rise of their power ballad single "Alone", which has invaded the Top 5 of the Top Rock Songs chart, "Lifelines" has been able to move over a hundred and seventy thousand units since its release last October, continuing to remain in the Top 20 of the iTunes Rock Albums chart.