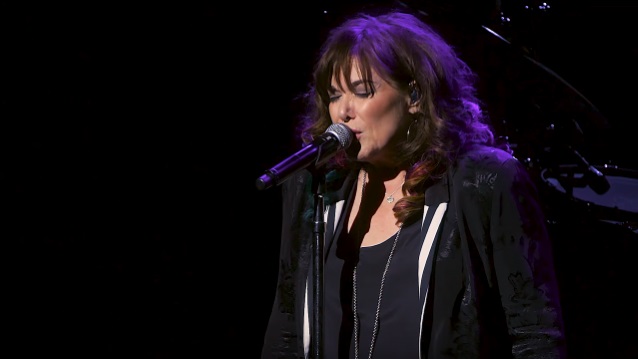 HEART's Ann Wilson is currently working on her new solo album, "Immortal", which is due out this summer via BMG.

While the full track listing is still being unveiled, "Immortal" will feature some of the singer's favorite musicians and songs by paying homage to those lost in the past few years, including the AUDIOSLAVE classic "I Am The Highway", from the band's self-titled 2002 debut album; Lesley Gore's "You Don't Own Me"; Amy Winehouse's "Back To Black"; TOM PETTY AND THE HEARTBREAKERS' "Luna"; and THE EAGLES' "Life In The Fast Lane" in honor of Glenn Frey. For the new release, Ann teamed with original HEART producer Mike Flicker.

In the video below, Ann talks about Chris Cornell, her Rock And Roll Hall Of Fame performance of SOUNDGARDEN's "Black Hole Sun", and why she chose AUDIOSLAVE's "I Am The Highway" for "Immortal".

"The AUDIOSLAVE number is my favorite Chris Cornell song," she previously said. "It's just all about, I'm not the thing, I'm the bigger thing, I'm not your magic carpet ride in the sky. It's a really great song. It has a lot of particular meaning to me because Chris was my friend. The words in 'I Am The Highway' talk about dissatisfaction, and alienation, and someone who is just on their way. They're not going to hang out with the friends and liars."

"Whenever I hear that song, I think about Chris a lot, because he was always at odds with his success," she said. "The expectations that were put on him being the voice of a generation, and a superstar of the '90s and 2000s and stuff was too much for him. It was really uncomfortable, and he wasn't just bragging about being uncomfortable, he was. It was too much. He basically was a real pure being, and complicated, but really pure, childlike. He had one foot in wanting to be famous, and one foot in just being so uncomfortable there, that he was caught somewhere in the middle. He was so beautiful and handsome, but tender. He was a really, really good person. But this world was just… he went as far as he could go."

Following some additional solo shows this spring and summer, Wilson will join Jeff Beck and Paul Rodgers for the "Stars Align Tour", as the album is released. Kicking off July 18 in West Valley City, Utah, the tour stops in 20 cities across the U.S. and Canada, including Dallas, St. Louis, Chicago, Toronto and Nashville, before wrapping August 26 in Tampa.