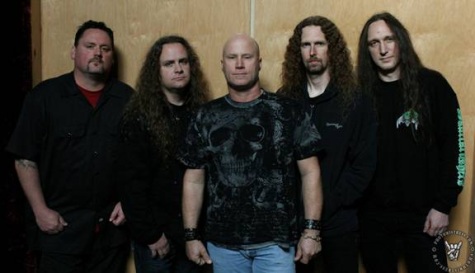 Commented HEATHEN founding member and guitarist Lee Altus: "I'm really happy and couldn't think of a better label for HEATHEN. I've known people at Nuclear Blast, some of whom have been fans of the band going as far back as the early demo days, and have been friends with them for many years. It's amazing for me to think that throughout this band's career, every album we recorded has been released on a different label. I can finally say that we have found home. Nuclear Blast has become a mecca for Bay Area thrash bands and we are happy to join our friends and partners in crime EXODUS, DEATH ANGEL, TESTAMENT and FORBIDDEN. Now it's time to get to work on the new album!"

Added HEATHEN lead singer David White: "I want to thank all the fans for their amazing support; we do not take any of this lightly! Now we move forward with a true metal record company that really understands what we're all about, 2012 and beyond!!!"

Stated Jaap Wagemaker of the A&R Department at Nuclear Blast in Germany: "It is no secret that the staff of Nuclear Blast has a soft spot for thrash metal. We all grew up here with classics such as 'Breaking The Silence' and 'Victims Of Deception', and who doesn't remember that legendary tour from 1991 with SEPULTURA, SACRED REICH and HEATHEN destroying the stages night after night! We are totally stoked to announce that these legendary Bay Area Thrashers have inked a deal with us and are now labelmates with EXODUS, DEATH ANGEL, TESTAMENT, FORBIDDEN, ANTHRAX, SEPULTURA, OVERKILL, KREATOR, DESTRUCTION and TANKARD!!!

"Since HEATHEN's reunion for 'Thrash Of The Titans' [in 2001], we had been following the band very closely over the last couple of years with first-hand information from Lee Altus — who is also swinging the axe in EXODUS — and what we heard from him made us very curious! After seeing HEATHEN play an amazing show at Rock Hard and their release of another classic album with 'The Evolution of Chaos', it was very clear to us that the band needed to become part of the Nuclear family as well. Seeing the band play several times at last year's Thrashfest Classics, we were finally able to make this work!! With the signing of HEATHEN, another thrash dream has came true!! Welcome home, guys!!!"

VieBrooks replaced previous HEATHEN bassist Jon Torres, who was forced to leave the group in order "to focus on his health."

HEATHEN's current lineup is as follows:

Photo by Alina Michelle of PhotoMistress.com