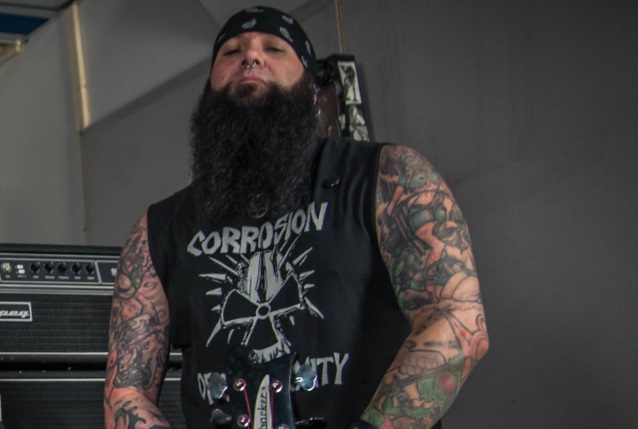 FOGHOUND and SERPENTS OF SECRECY bassist Rev. Jim Forrester was shot to death outside a Baltimore tattoo shop Monday evening. He was 43 years old.

Forrester, a body-piercing artist at the Baltimore Tattoo Museum, was at work just after 7 p.m. when he stepped outside to speak to his wife on the phone. "She heard him say, 'Get away from me. Get away from me' a couple of times and heard some noise and commotion, the phone drop and then no more communication with him," Museum owner Chris Keaton told WJZ. "She called inside to have us check on him and somebody discovered him on the ground out there."

When the police arrived at the 1500 block of Eastern Avenue at around 7:30 p.m., they found Forrester being treated by Baltimore City medics for a gunshot wound. He was taken to Johns Hopkins Hospital, where he later died.

Police are still looking for witnesses in what was Baltimore's 334th killing this year. They have not identified a suspect or a motive in the case.

Prior to joining FOGHOUND and SERPENTS OF SECRECY, Forrester played bass in SIXTY WATT SHAMAN.

"He had a huge passion for what he was doing," Keaton told The Baltimore Sun.

Forrester recently suffered from health issues, including a blood clot in his liver. Despite this, he continued performing with his bands, and appeared with SERPENTS OF SECRECY at the Maryland Doom Fest in Frederick in June.