The 18-year-old singer of the Italian gothic heavy metal band SOUL CRY and her 16-year-old brother, the band's bass player, are facing premeditated attempted murder charges after allegedly stabbing the group's guitarist dozens of times because he did not play well enough, according to the Associated Press.

The 16-year-old victim was attacked Saturday night (December 6) after SOUL CRY rehearsed in Sestri Ponente, a small town near Genoa. He was stabbed about 50 times, mainly to his back and head, said police official Alessandra Bucci in Genoa.

During the rehearsal, band members accused the victim of playing poorly, police said. The attack occurred moments later in a narrow alley.

Cristina Balzano (pictured below) was caught by police holding a kitchen knife with a 7-inch (18-centimeter) blade, her brother next to her and the victim in a pool of blood, Bucci said.

Read more from the Associated Press. 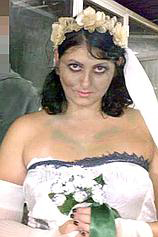