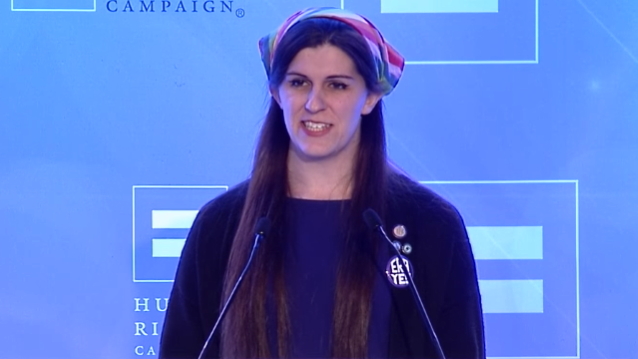 Danica Roem, the first openly transgender person to be elected to a U.S. statehouse seat, was reelected to her Virginia seat on Tuesday. Roem is the longtime lead singer of a metal band called CAB RIDE HOME.

Democrat Roem, a former journalist for the Montgomery County Sentinel and a lifelong resident of Manassas, Virgina, bested her Republican opponent Kelly McGinn by a 57-43 margin. She will continue to represent the 13th District in the Virginia House of Delegates — encompassing Manassas, Manassas Park, Gainesville, and Haymarket.

"Danica Roem has once again made history, becoming the longest-serving and first openly transgender elected official to be re-elected in our nation's history," Human Rights Campaign president Alphonso David said in a statement (via The Daily Beast). "Throughout her tenure in the House of Delegates, Roem has remained focused on the needs of her constituents, despite hateful and divisive attacks from anti-LGBTQ groups and her opponents."

"In 2017, Danica wrote the playbook on how transgender candidates can defeat anti-LGBTQ opponents through authenticity and attention to everyday issues—and her reelection victory sets it in stone," Annise Parker, president and CEO of the LGBTQ Victory Fund, said in a statement.

Erin Uritus, CEO of Out & Equal, said in a statement: "Two years ago, Danica Roem broke an important barrier when she became the first openly transgender person elected to the Virginia statehouse. Today, she made history again as the first to be re-elected! This historic victory is a meaningful affirmation that transgender Americans belong in every aspect of public life — at work, in our armed forces, and in elected office."

Roem, who was three years old when her father, John Paul Roem, took his own life, began her physical gender transition in 2012. Three years later, she legally changed her first name from "Dan" to "Danica."

CAB RIDE HOME released its debut album, "Crash The Gate", in 2017. According to the band's web site, its style of music is "drunken thrash metal" and the "songs are about drinking and ... raging."

"Just because I sing in a heavy metal band while spinning my head in circles and getting paid to do it, why can't I run for government? Why would I have to change who I am in order to run for government? I've already had to go through transformative change," Danica told Noisey two and a half years ago.