HELLOWEEN To Join Forces With HAMMERFALL For Spring 2022 European Tour

The reunited expanded classic lineup of German power metallers HELLOWEEN will join forces with Sweden's HAMMERFALL for a European tour in the spring of 2022. The "United Forces 2022" trek will kick off on March 25 in Oslo, Norway and conclude on May 5 in London, England.

Commented HAMMERFALL singer Joacim Cans: "HELLOWEEN is probably the band that influenced me the most growing up and I am extremely psyched about touring together with the guys. For the true metal fan, 'United Forces 2022' will be the ultimate metal experience. An experience that no one should miss for anything in the world. If there is one tour to experience in 2022, this is the one! Next year the Hammer will fall harder than ever before and every day will be HELLOWEEN!"

Added HAMMERFALL guitarist Oscar Dronjak: "We are so ridiculously excited about this! Not only do we get to go out on tour again after two looooooooong years of stage draught, but we get to do it with a band that we love and was a great inspiration to us in forming HAMMERFALL in the first place. The 'United Forces' tour will be something truly special, you can count on that!"

Said HELLOWEEN's Andi Deris: "We are 'hammered' to have our friends from HAMMERFALL with us on tour! Back in 2002, the band produced their album 'Crimson Thunder' in my studio in Tenerife and we had a lot of fun back then. This mega package is delivering the appropriate metal-spectacle to enter the stage with full power!"

HELLOWEEN will release its new, self-titled album on June 18 via Nuclear Blast. The disc's first single, "Skyfall", will arrive on April 2. 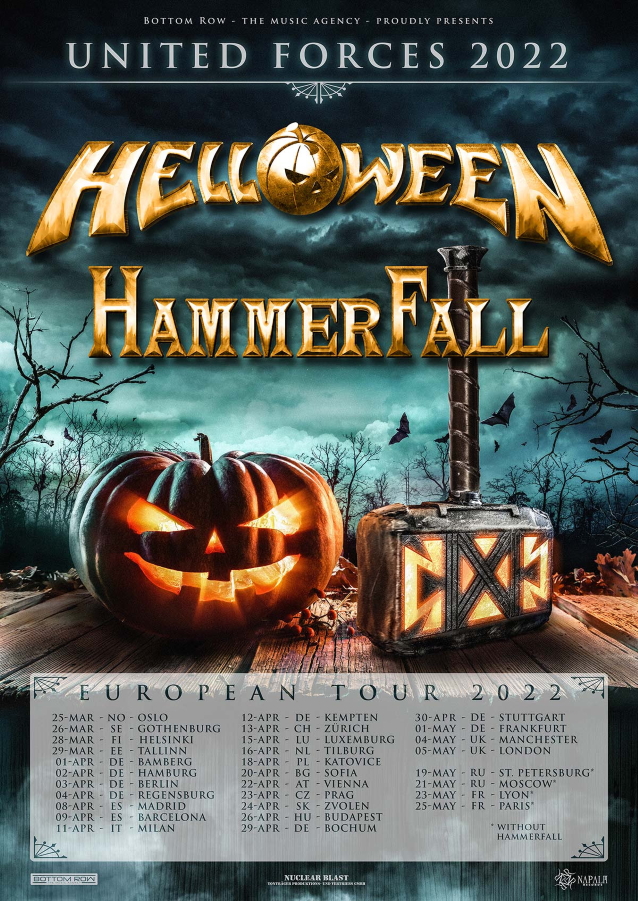