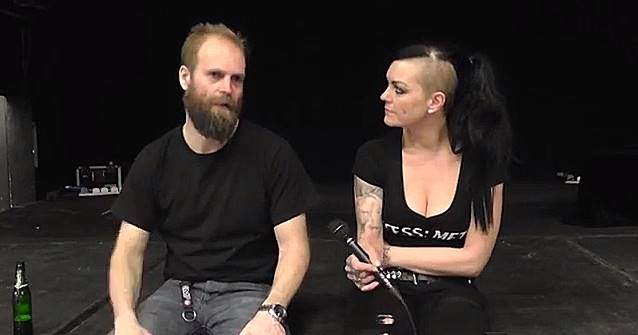 On December 7, 2013, Anna Dave Bertram of Sweden's Access: Rock conducted an interview with with guitarist Andy Sneap of reactivated British occult metal legends HELL at Arenan/Fryshuset in Stockholm, Sweden during the band's European tour with AMON AMARTH. You can now watch the chat below.

01. Let Battle Commence
02. Something Wicked This Way Comes
03. Plague And Fyre
04. The Devil’s Deadly Weapon
05. Save Us From Those Who Would Save Us

Commented HELL's Kev Bower (guitar, keyboards, vocals): "The artwork for 'Curse And Chapter' is once again the result of our collaboration with artist Dan Goldsworthy and photographer Nigel Crane, who we first worked with on the 'Human Remains' album cover in 2011.

"The digipak for this is one of the most complex pieces of CD/DVD packaging ever attempted by Nuclear Blast, and the concept for this was dreamed up by myself and Andy Sneap [guitar] whilst staggering back from the local pub late one night, after a 'heavy creativity session.' It was inspired by the rise in spiritualism in England during the 19th century, during which time séances and attempts to communicate with the dead became commonplace — along with the establishment of numerous secret cults and aristocratic organizations who would meet in secret, attempting to raise spirits and reach 'the other side.' We also wished to explore the phenomenon known as 'post-mortem photography.'

"Because photography was very costly at the time, the only time ordinary families could justify the expense was after the subject was already dead. We became gripped by these macabre Victorian images of deceased family members and children being posed alongside their living families, often being supported in a standing position by equally macabre mechanical devices designed specifically for this gruesome purpose. The other major issue with spirit communication is that you never know who (or what) will 'come through' — and it was common for malevolent entities to create havoc in the séance room.

"Dan's done a superb job of rendering our dark imaginings into reality, using his vision and skill to generate an entire art platform based around the existence of such a secret aristocratic spiritual cult. The cover image shows the cult's symbol, and his manipulation of the additional photography shows a set of disturbing images which could easily have been shot at the turn of the century in some dark, dangerous English country house, during an exchange with the dead which should not happen."

Cited as a huge indirect influence, and as one of the true founding fathers of occult metal, HELL formed in 1982 from the carcasses of U.K. metal bands RACE AGAINST TIME and PARALEX, whose "White Lightning" EP was listed by METALLICA as a favorite, and which was subsequently included on the Lars Ulrich, Geoff Barton "NWOBHM '79 Revisited" sampler album.

Despite over five years of constant touring, the band was cruelly overlooked by the '80s music press, who just didn't get it. HELL were too different, too extreme, too musically intelligent and far too thought-provoking for all but the most enlightened to understand them. The final crushing blow came when their long-awaited 1986 album deal with Mausoleum collapsed as the label went bankrupt, followed by the tragic suicide of singer/guitarist Dave Halliday in 1987. The remaining members drew a line in the sand and stopped playing overnight. 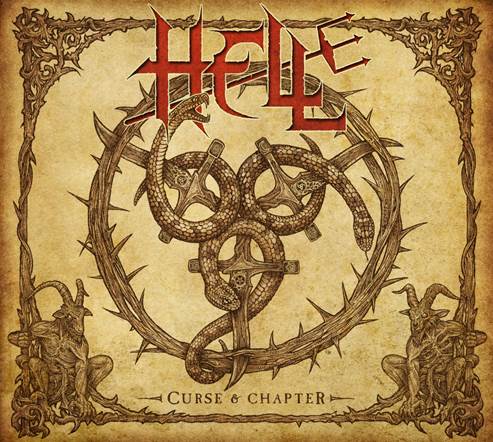