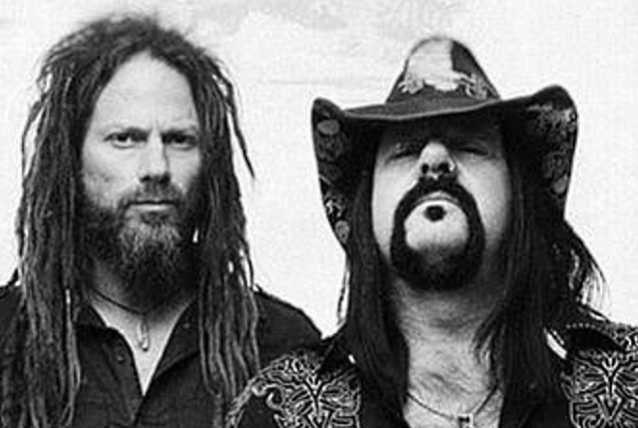 HELLYEAH Bassist On VINNIE PAUL's Death: 'It Was Awful'

HELLYEAH bassist Kyle Sanders says that "everything was put on hold" with the band following the death of Vinnie Paul Abbott. Last June, the drummer died from cardiomyopathy, or an enlarged heart, with coronary artery disease being identified as a significant condition in his death.

Sanders, who launched Let There Be Rock Schools in Gainesville, Georgia while HELLYEAH was taking a break, told the Gainesville Times about his friend's passing: "It was just heavy. It was awful. And dealing with that, everything was put on hold because we weren't sure what was going to happen. Everyone was dealing with it in their own ways and then a light just went off. I was talking to a friend and I was like, 'This is the time to start [the rock music school].'"

Let There Be Rock Schools, which is described as "a combination music lesson facility and rock and roll community center," will hold its grand opening on St. Patrick's Day weekend in mid-March.

"I don't know what to expect," Sanders said. "Everybody I've talked to — of course the kids are excited, but even the parents — are like, 'That's awesome.' They're excited about it."

Not long before his death, Vinnie laid down the drum tracks for HELLYEAH's sixth album, which is due later this year.

In late June 2018, singer Chad Gray released a statement on the death of Vinnie Paul, saying that dealing with his passing "has been one of the toughest things I've ever had to face in my life. I'm so confused, sad and as helpless as I've ever been," he said. "I'm at a loss and completely devastated. But I'm trying. It's the equivalent of an emotional riot in my head and in my heart as I write this. But I'm trying to focus on anything good. I know Vinnie would want that. And the good things are my memories of him. His smile, his infectious laugh and his personality that beamed light."

Gray added: "I just want to say, thank you, Vinnie Paul! For saving my life, for your music, for your endless generosity, for accepting me into your life, for creating our music that touched people, for being proud to be in HELLYEAH and for always treating me like a brother and more importantly for treating me like a friend... I will always love you and go to the end of the earth to carry the torch for you and Dime's legacy."

Sanders is a former member of BLOODSIMPLE, the New York-based band founded in 2002 from the remains of legendary New York hardcore act VISION OF DISORDER.