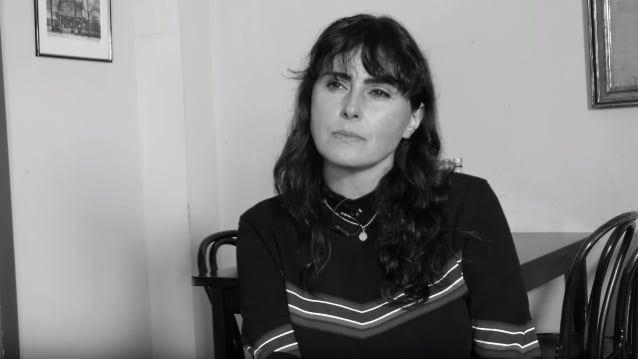 Holland's FaceCulture recently conducted an interview with frontwoman Sharon Den Adel of Dutch metallers WITHIN TEMPTATION about the band's new "Resist" studio album. You can watch the entire chat below. A few excerpts follow (transcribed by BLABBERMOUTH.NET).

On what year was the most important during the four-year break between studio albums for WITHIN TEMPTATION:

Sharon: "For me, it was making [the side project] MY INDIGO. MY INDIGO is where my journey started also for 'Resist', the album for WITHIN TEMPTATION. When I discovered for WITHIN TEMPTATION at the time, I stopped writing for a certain while and then when I did start writing again, something totally different came out. It was more indie pop kind of music, singer-songwriter kind of stuff. To understand where it came from, I really had to dig into my own personal life. Also, making music for the first time that I had never made before."

On whether she was surprised by MY INDIGO's output:

Sharon: "I was very surprised. This was music from my past, the '80s that I grew up with, but also a lot of things that are happening now, but also personal. It was a mixture of old and new coming together and it was just my personal journey that I had to go back to the '80s when I was growing up and coming back to 2017, 2018, where we are now. I discovered that I really had to look differently at music again because I didn't understand the scene. I had to describe myself, 'What kind of music am I making?' I didn't have a clue. Also looking at other bands who were more in the scene in what I was trying to do at the time and I learned from that music scene a lot and I think that was the basis, also, for the new album of WITHIN TEMPTATION."

On the personal journey she went through, including her father's illness and subsequent passing, leading up to the making of "Resist":

Sharon: "It was pretty intense, especially because we had a different view on how he should approach his illness. I wanted him to go the most specialist hospitals and he was, like, 'I'm here in a local hospital.' Although it didn't go exactly how it was supposed to go in that hospital, he was still very loyal to the hospital. I was, like, 'Please take a second opinion.' Stuff like that. I eventually learned that I had to let him go and do his own way of things and how he felt comfortable with it, I was also always thinking about my mom, like, 'Okay, the local hospital is very close by and she can visit my father every day. She doesn't have to drive a long time.' Stupid things like that. Eventually, it's his journey and his life and I had to let him go because we had too many fights about it. He was very positive, while I was always trying to warn him from the dangers of if he didn't react in time in how the process was going with his illness. He was just always full of confidence that he would make it and he would be okay and he was trying to be the wise dad and try to be there for me while I just wanted him to get better. I was trying to help him make other decisions."

On what she brought from MY INDIGO and her father's illness into "Resist":

Sharon: "I dedicated one song to him on this album. He was a huge WITHIN TEMPTATION fan. I wrote 'Supernova' for him. It's like you and I talked about off-camera about energies and just wondering where energy goes. You're always hoping that energy does go on, although it's not feasible. It's more than meets the eye. I'm not a typical religious person; I never grew up with religion, but I'm a spiritual person. I believe there must be something. Maybe it's just hope. I don't know. [Laughs] I'm still in conflict with myself with science and what it is I'm hoping for."

On how MY INDIGO influenced her lyrics for "Resist":

Sharon: "What I learned from MY INDIGO is sometimes to be more direct and I think I'm even more on the new WITHIN TEMPTATION with certain songs than with the MY INDIGO. Some songs were very urban-influenced and very direct with a certain slang kind of way of singing and also just right in your face, just say how you feel. There's this one line in 'Holy Ground', it's, like, 'It's been a while since I told ya that I hate ya.' I never would have written that in any album before. [Laughs] I found it very liberating to say sometimes what you feel."