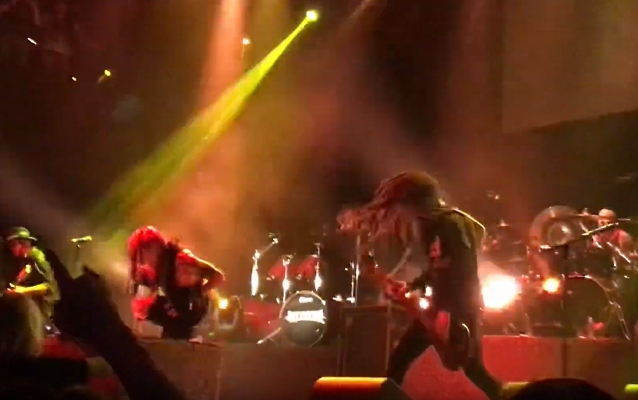 The show marked HELLYEAH's debut concert with STONE SOUR's Roy Mayorga, who has stepped in as Vinnie Paul's replacement.

In addition to all the HELLYEAH favorites and songs from the band's upcoming album, HELLYEAH played cover versions of the PANTERA classics "I'm Broken" and "Walk".

Mayorga's addition to HELLYEAH was made official on May 6. At the time, the band said Roy was the perfect guy to take Vinnie Paul's place. "These men had so much love and mutual respect for each other, this makes our transition so much easier," HELLYEAH said in a statement.

Vinnie Paul died last June of dilated cardiomyopathy, an enlarged heart, as well as severe coronary artery disease. His death was the result of chronic weakening of the heart muscle — basically meaning his heart couldn't pump blood as well as a healthy heart.

Not long before his death, Vinnie laid down the drum tracks for HELLYEAH's sixth album, which is tentatively due this summer.

In March, HELLYEAH released the official music video for a new song titled "333". The clip was filmed at Duff's Brooklyn in Williamsburg, Brooklyn, New York.

Tonight we celebrated the life of a legend Vinnie Paul. The sold out Hellyeah takeover had our house raging all night...

The Party has started! 🤘🏽 HELLYEAH has hit the stage 🔥