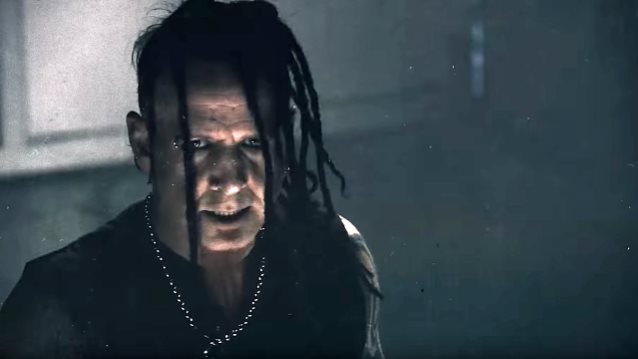 HELLYEAH Frontman: 'PANTERA Can Never Do A Reunion'

HELLYEAH frontman Chad Gray says that people constantly calling for a PANTERA reunion are "assholes" for seemingly forgetting that Vinnie Paul Abbott "watched his brother get tragically murdered in front of him."

Speaking about the inspiration for the title of HELLYEAH's new album, "Unden!able", Gray told Revolver magazine: "As an artist — or whatever you do — you wanna be respected for your work. But even after all the records we've done, there's still the stigma of PANTERA and MUDVAYNE and everyone wanting the reunions and all this shit, so it was like, 'Is what we're doing not good enough?” I think it was this unspoken headspace that we had going into this new record, and when I was writing the song 'Be Unden!able', I came up with the line, 'If you're tired of being denied, be undeniable and dot your I's on the bottom.' And dotting your I's on the bottom is an exclamation point. So I think the name 'Unden!able' kind of validates what HELLYEAH does."

Asked if the "Unden!able" title is also meant to discourage all the calls for reunions, Chad said: "Tragically, even if Vinnie wanted to, PANTERA can never do a reunion. You can't do a reunion without a member of a band. I think that people forget the emotional aspect of this: Vinnie" — who played drums in PANTERA and is now a member of HELLYEAH — watched his brother get tragically murdered in front of him, and what's on their mind? They wanna see a PANTERA reunion. I'm not trying to call people out as assholes, but people are kind of assholes. They forget that he had to live this."

Gray also addressed the possibility of a reunion of his former band MUDVAYNE, which has been dormant since 2010. He said: "With MUDVAYNE, it is what it is. I'm tired of stringing people along. I still talk to the guys; we're cool. But for many reasons, MUDVAYNE doesn't exist anymore. Someone posted that 'MUDVAYNE 201?' thing online [hinting at a possible MUDVAYNE reunion] and they shouldn't have done that, because it's fucking with MUDVAYNE fans emotionally, which isn't fair. I don't want to wind people up, but who am I to say that can never happen again? But I'm certainly not gonna say that it can."

Vinnie Paul has consistently shot down any talk of a hypothetical PANTERA reunion, telling Brazil's Wikimetal back in 2014: "The bottom line is they call it a reunion, and that means to bring the original members back, and we can't bring Dime back, and he was such a huge part of PANTERA. I don't wanna damage or tarnish the legacy of him or the band. We had 14 amazing years together and it's time for everybody to move on. And I have definitely moved on in my life. I don't live in the past. I like to live for today and what's coming up tomorrow, and I love what we're doing with HELLYEAH. And that's my focus and that's my goal, man."

"Dimebag" Darrell Abbott was co-founder and lead guitarist for PANTERA. When PANTERA broke up in 2003, Dimebag and Vinnie Paul formed DAMAGEPLAN. On December 8, 2004, while performing with DAMAGEPLAN at the Alrosa Villa in Columbus, Ohio, Dimebag was shot and killed onstage by Nathan Gale. He was 38 years old.

MUDVAYNE released five albums between 2000 and 2009, with the first three going gold and launching this such as "Dig", "Not Falling", "Happy?" and "Fall Into Sleep".