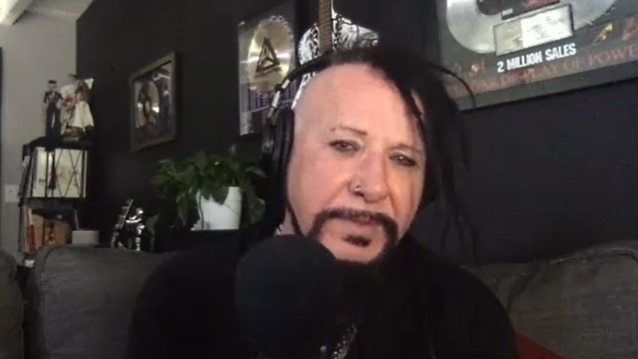 He continued: "The Ten Commandments, those are pretty important. You don't have to be religious to not wanna kill people, or not lie, so I kind of live my life by that — by the Commandments. It's just, like, do the right thing. You don't even really need those written out to know not to wanna do that. So I do have a level of spirituality inside of me. And I have a connection with something. I'm very grateful, in my life, for… As turbulent as my life has been at times, something's always carried me through it. But I think that's just a belief in something larger."

Last month, MUDVAYNE announced that it was reuniting after a 12-year hiatus, and will be performing at all four Danny Wimmer Presents U.S. festivals in 2021: Inkcarceration Music & Tattoo Festival (a headlining performance) in Ohio, Louder Than Life in Kentucky, Aftershock in California and Welcome To Rockville in Florida. These dates mark the band's first shows since 2009 and their only dates this year.

In March, Gray released a solo single, a cover of "Always On My Mind" — a song made famous by Willie Nelson. The track was originally recorded for his fall 2020 wedding to SiriusXM on-air personality Shannon Gunz.