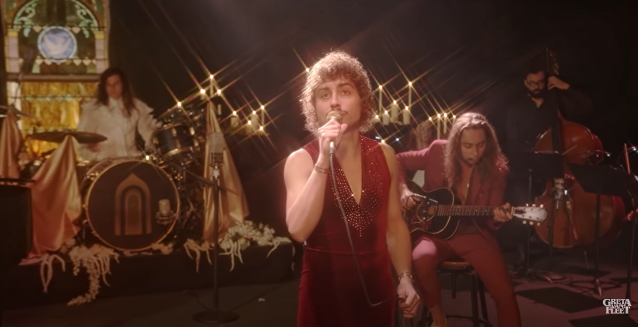 GRETA VAN FLEET has released a performance video for the song "Tears Of Rain" as part of the Grammy-winning band's "Candlelight Sessions". The track is taken from the group's sophomore studio album, "The Battle At Garden's Gate", which came out on April 16 via Lava/Republic Records.

Accordingly, GRETA VAN FLEET poured everything they experienced into these new songs — the music reflects their spiritual and intellectual growth, increased awareness of the inequalities plaguing the modern world, and deep empathy for what other people are going through.

Sonically, "The Battle At Garden's Gate" also feels bracingly modern, an embodiment of genre-blended musical freedom. Recorded in Los Angeles with Greg Kurstin (FOO FIGHTERS, PAUL MCCARTNEY),the album is ambitious and expansive, marked by epic journeys such as the second single, "Age Of Machine", and the Top 5 rock hit "My Way, Soon", which boasts a towering chorus hook and rip-it-up-and-start-again lyrics.