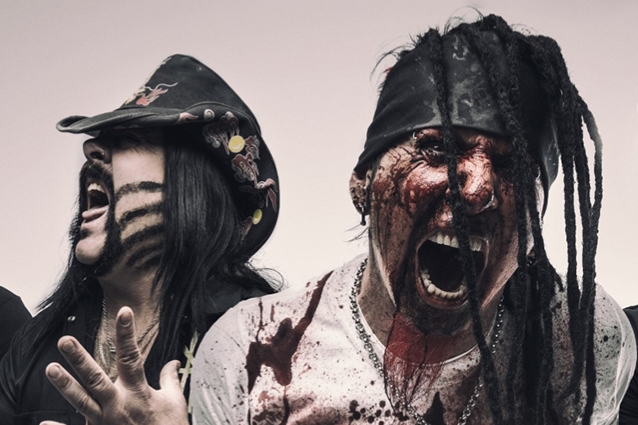 HELLYEAH's CHAD GRAY On VINNIE PAUL: 'He Became My Fire, My Light, My Strength'

HELLYEAH vocalist Chad Gray recently spoke with Cutter of the Green Bay, Wisconsin radio station Razor 94.7 and 104.7. The full conversation can be streamed below. A few excerpts follow (as transcribed by BLABBERMOUTH.NET).

On moving forward after the death of drummer Vinnie Paul Abbott:

Chad: "If Vinnie taught us one thing, it was how to carry the torch for someone. We learned that very early for [Vinnie's brother, Dimebag Darrell], and it was Vinnie's passion, and it became a HELLYEAH passion to carry the torch. We're excited to be able to do it for both of them now."

On HELLYEAH's forthcoming album "Welcome Home", which was being recorded when Vinnie passed away:

Chad: "I had just finished the fourth song, and I was putting music up to see what I was going to attack the next day, and then I got the call, like, 15 minutes after I had just finished the song... The next day, I got up and I'm thinking about everything — 'Do I walk away from this?' I sat there on the bed alone and talked to Vinnie out loud. I was, like, 'Brother, it'd be so easy for me to open my hand and just walk away from this and not have to bear this load, but I can't do that. I loved you; I love you; I will always love you. You're one of my biggest inspirations in music. You're one of my best friends, and I'm going to finish this. I don't know how, but I'm going to finish this.' I left there and we went to the services, and that was brutal. Then we came home for four days, and I went right back to the studio. Tom [Maxwell, guitars] went home; Kyle [Sanders, bass] went home; everybody went home. Me and [producer] Kevin Churko — an amazing man; I love him so much. He's been with us since 'Blood For Blood'. Kevin and I are very close, and his patience was out of this world, because it took me a minute. It was hard to get started again. I was kind of on a roll, and then kind of lost that roll, obviously. I had to get re-rolling. We just kept plugging through it. Vinnie just became my muse — he became my fire; he became my light; he became my strength. I talked to Kevin about it, like, 'The weight that I'm carrying right now feels so incredibly heavy.' It's just overwhelming the amount of pressure that you're under, and I just looked at him and I was like, 'But I know it should be heavier. I know it should be more,' which lets me know that he was taking some weight off of me, but leaving enough on me [laughs] to keep me focused. He wasn't going to make it easy by any means, because you don't want that. You want it to be tough; you want it to be emotional. But the load I was shouldering was over the top. I had to go back in and write six songs after he passed. It was just me and Kevin by ourselves. We just kept [the approach of] 'set 'em up, knock 'em down.' We got through it."

On titling the album after the song "Welcome Home":

Chad: "I'm not a religious man by any means, but I'm very spiritual. I have to want to believe that there's something bigger and better than humankind. You have to. If you're just good with all this, then okay, but I don't think I could make it through life knowing that there's not something else. It just does have that kind of esoteric deep meaning, because I do believe that Vinnie went home. He didn't leave us behind. We're all going to see him again, and I believe he's still with us to this day. He was with me the other night. I woke up the other day for the show. Two months ago, I would have told you I'd have been paralyzed that morning, but I was calm. I had this calm over me, because I knew that him and Dime were with us. That's the one thing that's given me peace through all this — knowing that his best friend in the world, his bandmate and his brother, he's with him again, and they're together again... 'Welcome Home' the songtitle was before he passed, and when we went to name the record, it just had another meaning, but it was still applicable and beautiful."

Chad: "It was, like, one of those silver platter moments — like, 'Here you go.' We didn't even really think about anything else. I had my first conversation with Roy, and I know Roy. He is one of the most beautiful human beings on this planet. He is the sweetest, coolest, nicest, most driven human being. Not only has he got mad skills, but I knew that even [if he'd just] be the 'fill-in' drummer, he was not going to take it lightly. That's not the way he's wired. He took it very seriously. That dude practically rehearsed for six hours a day for a month and a half to get it right... He just absolutely smashed it."

Vinnie Paul passed away on June 22, 2018 at the age of 54 due to a dilated cardiomyopathy and coronary artery disease.

"Welcome Home" will be released on Friday, September 27 via Eleven Seven Music.

HELLYEAH's 18-city headlining summer outing will kick off on Tuesday, July 23 in Atlanta, and will culminate in a special celebration on Saturday, August 17 in Dallas, Texas.

Listen to "Rockcast 130 - Welcome Home with Chad Gray of Hellyeah" on Spreaker.