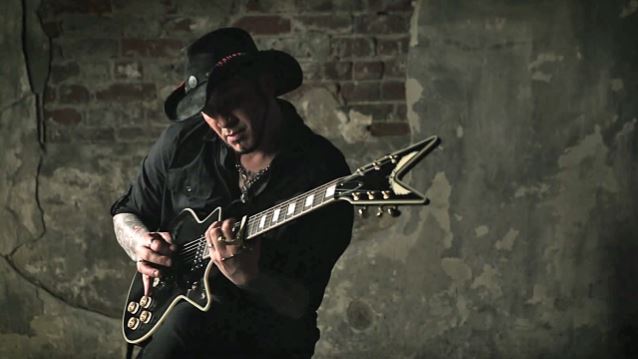 On July 17, Kristyn Clarke of PopCultureMadness.com conducted an interview with HELLYEAH guitarist Tom Maxwell at the Camden, New Jersey stop of this year's Rockstar Energy Drink Mayhem Festival. You can now watch the chat below.

Speaking about the future of U.S. festivals like Mayhem, Maxwell said: "I think the traveling festival is probably gonna die — unless some new bands emerge or something like that start… unless they start branching out. I think they're gonna just die because you can't compete with… You have all your radio stations coming up now, popping up, and they're putting on their festivals, in their town, and it's all over. And they call it, what is it? 'Loudest Month.' And it can continue on, with more stations that get behind doing that kind of thing. Which I think is cooler anyway, because the radio stations get fully behind it, they're pumping it non-stope; it's like feeding water to the masses. They're just soaking it in, and they're there. Every radio festival that I've ever been to has been fucking cool — even in the States. They're picking up exactly what they're doing in Europe. Now, in Europe, those festivals are part of culture now, and that's what needs to happen here."

He continued: "In today's climate, whether it's money or the lack of interest from the public in music… 'Cause there might be something else in the next month that you're saving up for. I think that that's the way it's gonna go. I think the traveling summer tours are a gamble, man. The promoters, they're putting a lot out on the line, and there's a lot of competition. And, like I said, you can't have the same bands coming back every year, every other year. It's just, like, 'Oh, really? Pizza again?' You know what I mean? It's just stale. It's the same bands."

"I was expecting this year to have SLIPKNOT again, or something. I know it's always AVENGED SEVENFOLD or SLIPKNOT and FIVE FINGER [DEATH PUNCH] and, you know… Who else is out there? It's just very little bands that are available, unless you wanna just keep feeding them. And then [the bands] get to the point of, like, 'Fuck this! I'll just do it myself.' That's what Ozzy [Osbourne] did [with Ozzfest]."

Maxwell added: "I think it's got a bleak future — the traveling tours. Even when you're not on a good tour like this, you really need a strong package nowadays. It's, like, we refuse tours left and right, and with bands that have buzz, because we want a fresh look. You know what I mean? We need bands that are gonna make the show exciting and not be, you know, just, like, stale…

"We tried so hard in the past two years to turn this steamboat around, from the stigma that's been with it, with the 'southern-party-metal' thing that I worked my ass off to kill with our new record [2014's 'Blood For Blood'] — and we all did; me, Chad [Gray, vocals] and Vinnie [Paul Abbott, drums], all three of us, just went into the studio and just crushed it with this record. And this is the path we want. And we wanna stay clear from anything that we were lumped in before, but we're also open to new ideas, and getting other bands that might not seem to be in the same genre. I mean, it's cool to branch out a little bit and [reach] a wider audience."

Maxwell's comments echo those made by HELLYEAH drummer Vinnie Paul Abbott, who recently told Australia's Music Business Facts: "If you look at the bands that are headlining all these festivals these days, there's no new bands — it's always METALLICA, it's always AEROSMITH, it's always JUDAS PRIEST, VAN HALEN, KISS… It's all these bands that have been around for forty years. The only band I can think of that's come along in the last ten or fifteen years that can headline festivals is LINKIN PARK, and that's really about it. Maybe SLIPKNOT [as well]. There really hasn't been the kind of artist development that there used to be. [When some of these older bands start retiring and they can't play anymore], it's gonna be a shock to the concert system, man. Live Nation and AEG and all these people are gonna have to figure out a way to turn some of these other bands into headliners. Either that or the festivals are gonna go away, you know, because every year, if you look at [the festival headlining acts], it's one of those bands that's been around forever."