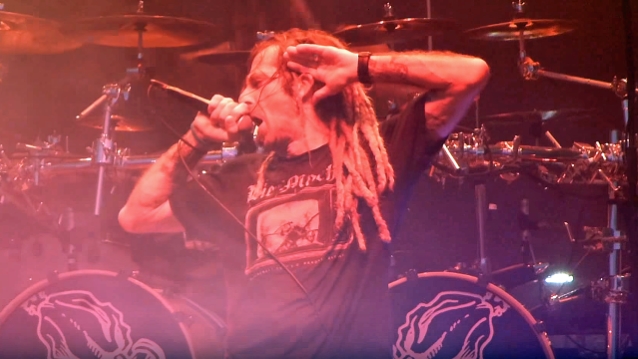 Jammcard has uploaded drum-cam footage of Art Cruz (PRONG, WINDS OF PLAGUE) performing the song "Laid To Rest" with LAMB OF GOD during the band's just-completed North American tour with SLAYER. Check it out below.

LAMB OF GOD made its live debut with Cruz on July 26 at Gilford, New Hampshire's Bank Of New Hampshire Pavilion.

Cruz filled in for LAMB OF GOD's regular drummer, Chris Adler, who sat out the band's tour with SLAYER "due to unforeseen circumstances."

LAMB OF GOD said in a statement that Art was recruited for the gig "at the recommendation of Chris." The band added that it expects "to see Chris returning in the very near future."

LAMB OF GOD is touring in support of its covers album, "Legion: XX", which was released under the BURN THE PRIEST banner on May 18 via Nuclear Blast in Europe and Epic Records in the U.S.

Lamb of God’s current drummer Art Cruz crushing Laid To Rest LIVE in this Jammcard Exclusive. We got access to film from directly behind Art to get this crazy drum cam footage. Lamb of God are out on the Slayer Farewell Tour so be sure to check it out.