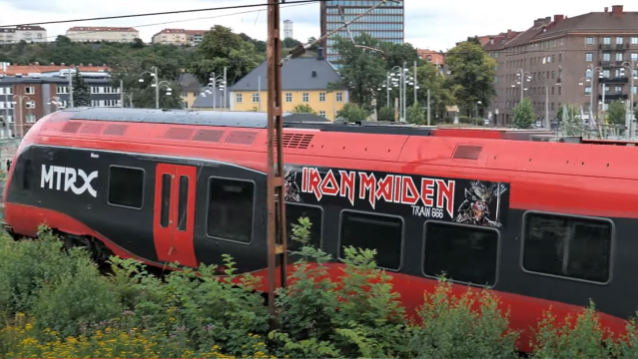 Legendary British heavy metal band IRON MAIDEN played a pandemic-delayed, sold-out concert on its "Legacy Of The Beast" tour in front of 61,867 fans at the football arena Ullevi in Gothenburg, Sweden on July 22. Train operator MTRX provided a special event train for MAIDEN fans from Stockholm to Gothenburg where each of the 244 passengers received a merchandise bag with an Eddie mask, a special 12-inch vinyl single and the train was decorated inside and out with MAIDEN.

According to the Trainspotting In SwedenYouTube channel, which has posted new video of "Train 666" traveling between stations (see below),the train is MTRX X74 74004 "Glenn" (Stadler Flirt) and has continued in regular service with the MAIDEN decorations in the days since the concert.

"Sweden has always been important to MAIDEN so we thought they deserved us to go an extra 110 percent, and we wanted to put on an experience and event for their fans," said Darren Edwards, international product manager at Warner Music, in a video tour posted by Sweden's SVT (Sveriges Television).

He added: "The whole band flew in early. Steve's [Harris, MAIDEN bassist] playing football [soccer] the day before the show, as he often does when he's in Sweden, Nicko [McBrain, drums] is probably playing golf …so there's just this special connection. They love Sweden, and they know the fans are really special over here."

"Legacy of the Beast" is set to hit North American shores on September 7 in Mexico City and run through an October 27 show in Tampa, Florida. TRIVIUM will provide support beginning September 11 in El Paso, Texas and ending on September 30 in Spokane, Washington. WITHIN TEMPTATION will then take over opening duties for dates beginning October 3 in Sioux Falls, South Dakota all the way through the aforementioned final concert in Tampa.

All aboard Train 666 bound for Gothenburg! Or shall we say… Hallowed Be Thy Train? Okay, Maiden train puns: go! 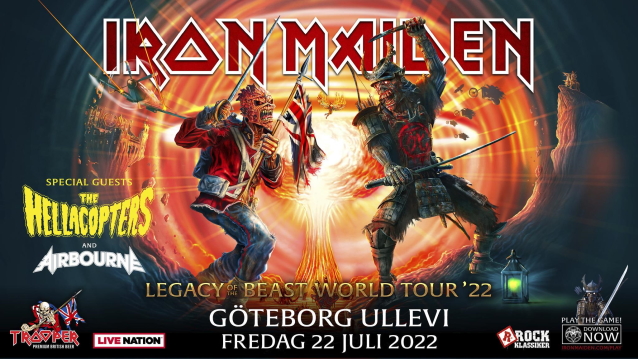