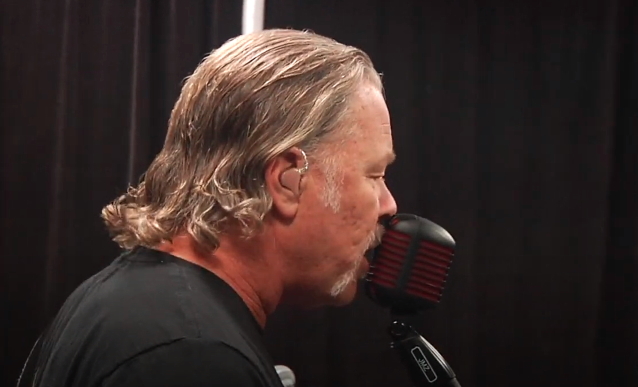 METALLICA has released video of the pre-show tuning-room jam at the band's September 6, 2019 and September 8, 2019 concerts with the San Francisco Symphony.

METALLICA and San Francisco Symphony's "S&M²" concerts were historic on multiple levels: They served as the grand opening of San Francisco's Chase Center, reunited the band and Symphony for the first time since the 1999 performances captured on the Grammy-winning "S&M" album, and featured the first-ever symphonic renditions of songs written and released since those original "S&M" shows.

Over the weekend, "Metallica And San Francisco Symphony: S&M²" entered the Billboard 200 chart at position No. 4. The effort, which was recorded exactly a year ago, earned 56,000 equivalent album units in the U.S. in the week ending September 3, according to Nielsen Music/MRC Data.

On August 29, METALLICA broadcast a show to hundreds of drive-in and outdoor theaters across the U.S. and Canada, as part of the "Encore Drive-In Nights" series. The concert was filmed nearly three weeks earlier, on August 10, at the Gundlach Bundschu winery, about a 30-minute car ride from the band's headquarters in San Rafael, California, and was subsequently edited and mixed by the band's award-winning production team to the highest standards possible.

Last month, METALLICA took part in an interview and short performance on "The Howard Stern Show".

METALLICA had been largely out of the public eye since last fall when the band canceled an Australian tour and announced that frontman James Hetfield was returning to rehab for the first time since 2002 to battle his addictions.