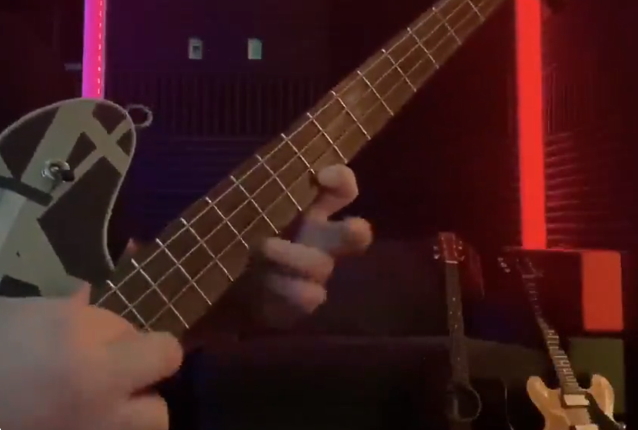 Wolfgang Van Halen has shared a short video of him playing his father's classic instrumental "Eruption" on bass. Check out the clip below.

The 29-year-old musician, who started playing with VAN HALEN when his dad Eddie and uncle Alex reunited with David Lee Roth in 2007, joked in an accompanying message that his entire debut solo album will contain "35 seconds of 'Eruption' on bass." He added: "Stay tuned for album number 2 where I play 35 seconds of 'Spanish Fly' on bass and nothing else."

Back in September 2017, Wolfgang commemorated the 40th anniversary of the recording of "Eruption" by posting a video of him playing the song on the original guitar it was tracked with.

Wolfgang has spent the last few years working on his debut solo LP, which he has said will not sound like VAN HALEN or feature guest appearances by any of the other VAN HALEN members. He also told a fan on Instagram that he sees his father's reputation as both a blessing and a curse when it comes to his own solo career. "I'm not trying to be my father, I'm trying to be me," he wrote.

This past February, it was announced that Wolfgang had signed a deal with Explorer1 Music Group for the release of his solo album. The disc is being recorded with producer Michael "Elvis" Baskette at VAN HALEN's 5150 Studios in California. The announcement called the set "a collection of diverse material...original songs ranging from haunting ballads to stomping rock classics, on which [Van Halen] recorded all the instruments and vocals himself."

So here it is, I guess. My entire album. 35 seconds of Eruption on bass. Stay tuned for album number 2 where I play 35 seconds of Spanish Fly on bass and nothing else. pic.twitter.com/AHyBv2AC5X

FUN FACT: I was not wearing pants when I recorded this

Yes I am unable to learn anything on my own. I always keep my dad right next to me in case I need to learn something. He keeps wanting to go home but I won’t let him.

What are you talking about, this IS my album

Holy shit are you Stanley Tucci?

Lol yeah. Haven’t done that in a while and now I’ve got a wicked blister on my index finger haha