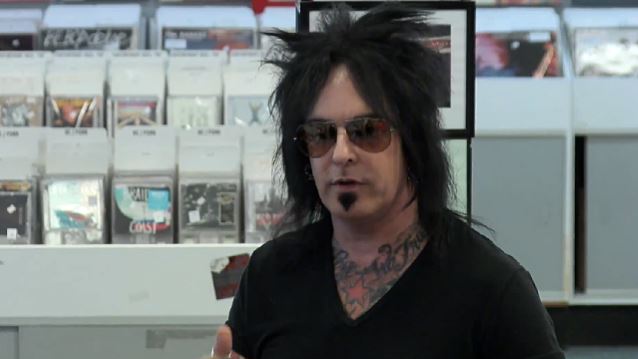 During a recent MÖTLEY CRÜE tour stop in New Jersey, rock icon and national radio host Nikki Sixx returned to his roots working at famous East Coast record store Vintage Vinyl to promote his other band SIXX: A.M.'s forthcoming album, "Modern Vintage", and offer a special giveaway to fans. Those who pre-ordered copies of "Modern Vintage" at the record store in Fords, New Jersey received a limited-edition seven-inch vinyl of "Gotta Get it Right", the first single from the new album that is due for release by Eleven Seven Music on October 7.

While photos of Sixx working at Vintage Vinyl were shared across social media, exclusive hidden camera footage was also filmed by the people behind some of your favorite hidden-camera pieces, TV Boy. The resulting video of Sixx (a.k.a "Larry") working behind the store counter, including assisting customers with music searches, answering phone calls, and failed attempts to use a cash register, bag albums, all while denying his true identity, can be seen below.