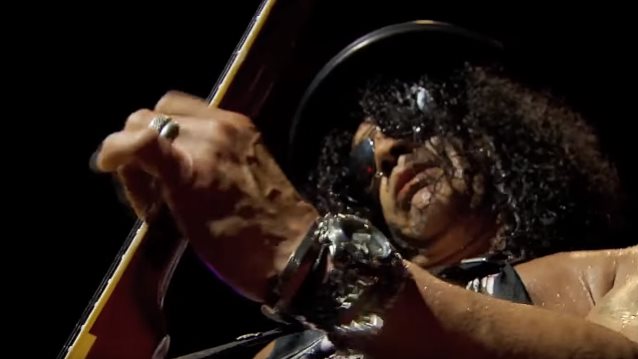 The metallic red B.C. Rich Warlock guitar owned and played by Slash during the Hollywood era early days of GUNS N' ROSES has been found and is being offered for sale at auction on November 5 through Julien's Auctions. The guitar is signed on the body "Slash" with his signature drawing of a "skull and crossbones wearing a top hat" above a banner that reads "R & Fn R" and is accompanied by a Slash signed letter of authenticity.

Slash custom ordered this guitar from B.C. Rich through the Hollywood Music Store in West Hollywood, California in the early half of 1984. His first professional public performance was with this guitar at Madame Wong's West in Santa Monica, California on June 16, 1984 where he performed with HOLLYWOOD ROSE for the first time which featured future members of GUNS N' ROSES, W. Axl Rose and Steven Adler. Another notable performance with the B.C. Rich Warlock was at The Troubadour in West Hollywood, California on June 6, 1985 where Slash performed at the first GUNS N' ROSES show with the classic lineup of W. Axl Rose, Steven Adler, Izzy Stradlin and Duff McKagan. This guitar was one of Slash's main guitars during the formative Hollywood era of GUNS N' ROSES and was one of his favorites at the time. During 1985 and 1986, Slash performed publicly with the guitar 18 times on stage with GUNS N' ROSES, more than any other guitar he used during this period. This was also the guitar he used during his audition for the band POISON in March 1985.

The B.C. Rich Warlock was last played in January of 1987 by Slash and stored away in its custom Anvil guitar case (he is to date the only person to ever play it); between rehearsals, studio recordings, and live shows this guitar has seen hundreds of hours of play by Slash! It has never been displayed publicly but is well documented through many photographs from that time period as well as many articles and biographies discussing its importance in Slash's career and GUNS N' ROSES' formation. Its whereabouts had remained a mystery for the last 30 years until now, which has only added another dimension to its folklore. This is truly an iconic museum quality piece of rock and roll history!

The guitar is acquired from the collection of GUNS N' ROSES/Slash original guitar technician and roadie Jason Solon, who is credited on the first three GUNS N' ROSES albums and mentioned in several GUNS N' ROSES biographies. It is accompanied by a signed letter of authenticity from Slash and Solon, the original custom Anvil hard case, and a timeline of the guitar's history highlighting where and when this guitar was played.