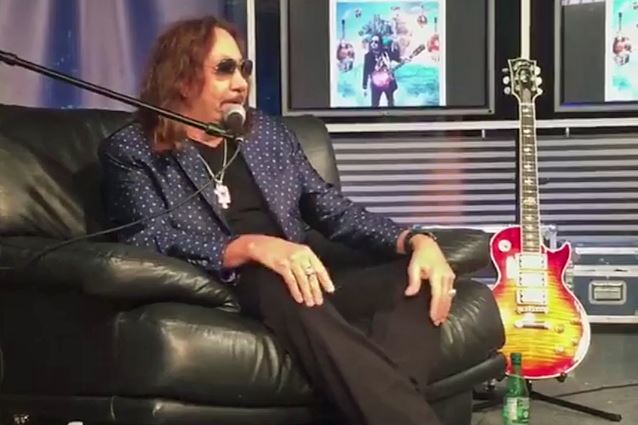 Asked if it was true that he served as a roadie for Jimi Hendrix at the guitar legend's last concert in New York prior to his death, Ace said: "Yeah. There was a peace concert at Randall's Island, which is right next to Manhattan island in New York City. I went to the show. I snuck backstage. I just kind of walked in. I was watching people walk in and out. I was watching the bands walk out to see other bands, and then I watched them walk back, and they'd just walked up with their head high and looked like they were somebody. So I just kind of walked in with this presence like I was in one of the bands, and the security guy just figured I was in one of the bands. So I'm back there about fifteen minutes, twenty minutes, and people were starting to say, 'Who is this fucking guy?' [Laughs] Finally, one of the road guys came up and said, 'Are you in one of the bands?' I said, 'No. I snuck back here.' He said, 'Well, can you do anything?' I said, 'Yeah.' Next thing you know, I'm seting up Mitch Mitchell's [Hendrix's drummer] drums. It was crazy. And then Mitch Mitchell walks over. But he he had changed his look. Because originally he started off with the afro, like Noel [Redding, Hendrix bassist] and Jimi, and then he changed his image; he got the beard and he got the headband. So when he initially walked over to check out the drums prior to the show, I didn't realize it was Mitch. And here I am walking around in high school with Jimi Hendrix's first album under my arm every day, and next thing you know, I'm talking to Mitch Mitchell and I didn't realize it was Mitch Mitchell. The roadie goes to Mitch, 'Hey, Mitch, what snare are you gonna use tonight?' And I [thought], 'Jesus Christ! It's Mitch Mitchell.' And that whole thing was a surreal day."