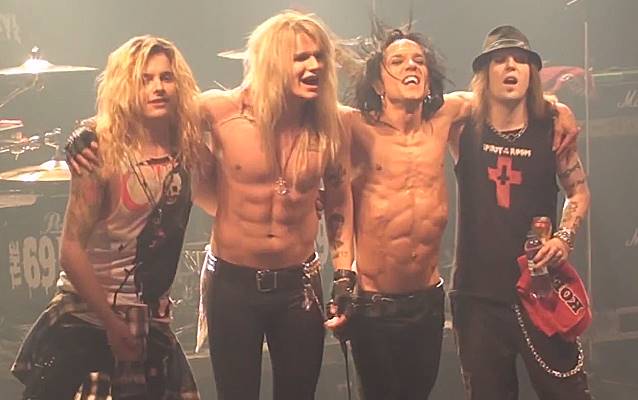 THE LOCAL BAND, the Finnish covers act featuring Alexi Laiho (CHILDREN OF BODOM),Jussi69 (THE 69 EYES),Olli Herman (RECKLESS LOVE) and Archie Kuosmanen (SANTA CRUZ),played a one-off show this past Friday, December 27, 2013 at Tavastia in Helsinki, Finland. The group's setlist consisted of 1980s "hair metal" classics, around 30 songs for which have been rehearsed, including tracks originally written and recorded by VAN HALEN, GUNS N' ROSES, POISON and MÖTLEY CRÜE.

"One night. One band. One interview. No rehearsals. Half soundcheck. One after-party," the band's founder, Jussi69, said.

"Lots of people are asking me how this happened and why. So the story goes like this:

"I talked with Alexi Laiho two weeks ago while he was on tour and I was in the backstage in somewhere in Finland.

"Alexi: 'Dude, we gotta get together, play some POISON, MÖTLEY and drink some Jack.'

"Few hours later, I texted and told him that I got Olli Herman to sing and Archie Cruz for bass because they're the best guys in the world for the gig, and the name for the band is THE LOCAL BAND. Alexi says: 'Perfect!'

"At first we thought of not to tell anybody, then we decided to make it public X-mas Eve as a present. I'm glad we did it.

"By the way, we did not take ANY money for doing this, we did it 'cause we wanted to have FUN!

"Thank you everybody who came and joined the party!

"We've been talking about doing a song or something together with Alexi for years just for fun, but our touring schedules are just insane.

"CHILDREN OF BODOM, THE 69 EYES, RECKLESS LOVE and SANTA CRUZ will all tour the world like crazy in 2014 in our separate ways.

"We were super happy after the show and we all felt that it was a big release to do something different, pure spontaneous, pure fun! It really gave us fresh thoughts and views to everything we all do in our own bands. This helped us to give the extra 100% for playing shows around the globe next year.

"I am still smiling."

THE LOCAL BAND's setlist was as follows:

CHILDREN OF BODOM will make its triumphant return to North America this February. The band has announced a six-week major market headlining tour that will kick off on February 14 in Quebec City, Quebec, Canada and hit 32 markets across the U.S. and Canada before wrapping with a two-night stand at New York City's Irving Plaza on March 28 and March 29. The tour will feature support from folk metal heroes TÝR and represents CHILDREN OF BODOM's first Stateside headlining run since the release of the band's new LP, "Halo Of Blood".