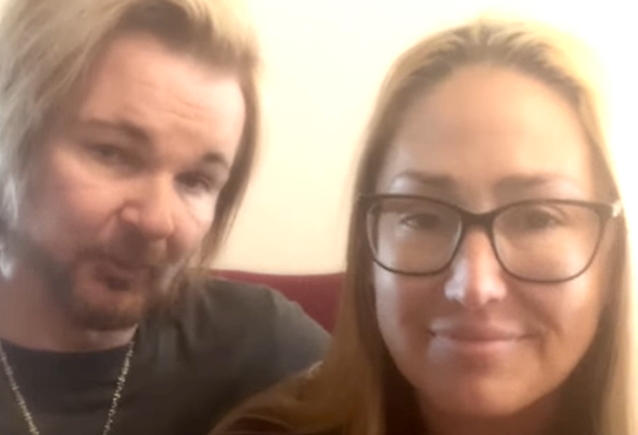 How RIKKI ROCKETT And His Wife 'Caught A POISON Scammer'

POISON drummer Rikki Rockett and his wife TC have shared a 13-minute video on social media in which they offer a step-by-step account of how they caught a "POISON scammer". The person in question was allegedly pretending to be Rikki's personal manager and contacting Rikki's fans via Instagram and other platforms and asking them for money in exchange for opportunities to meet the drummer in person.

In a statement accompanying the YouTube release of the video, Rikki wrote: "100% throw and go video because it just needed to get out right now! Yeah, a scammer. This nasty little scammer will take $200k from you and not even bat an eyelash if you let 'em! Let's take 'em down!!!"

This is not the first time Rikki's name has been used in a scam. Back in 2008, a rape charge against him was dropped after authorities determined that the POISON drummer was not in Mississippi at the time of the alleged crime. Authorities later said they were looking for a man with a history of passing himself off as a rock musician to pick up women.

Rikki and TC Smith got married in April. Attending the ceremony, which was held at the Granada Theatre in Santa Barbara, California, were Rikki's POISON bandmates Bret Michaels and Bobby Dall, as well as CINDERELLA drummer Fred Coury.

Rockett was declared cancer free more in 2016 after undergoing an experimental treatment. He was diagnosed with oral cancer back in 2015.

POISON's reunited original lineup — Rockett, Michaels, Dall and C.C. DeVille — just completed "The Stadium Tour" with MÖTLEY CRÜE, DEF LEPPARD and JOAN JETT & THE BLACKHEARTS this summer. The trek was originally scheduled to take place in the summer of 2020 but ended up being pushed back to 2021, and then to 2022, due to the coronavirus pandemic.

@rikkirockett does NOT have a personal manager. His management company would NOT contact fans in such a way. Poison and...

Rikki does not have a personal manager, much less a guy named Bruno.

Do not fall for scams and please forward this all...

Okay… Rikki does not have a personal manager named Jessica. Nor any woman is in his band's direct management. Nor are…