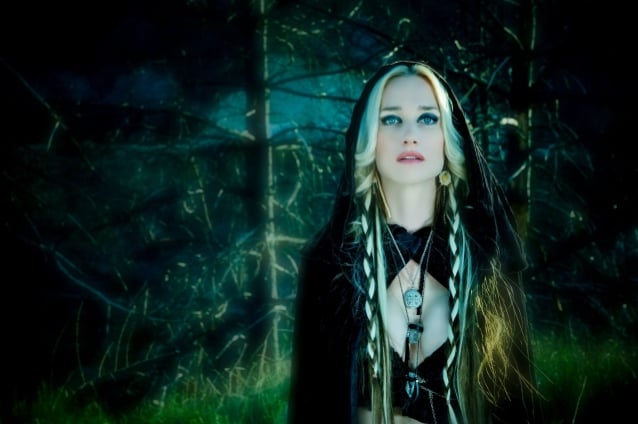 HUNTRESS singer Jill Janus has died by suicide. She was only 42 years old.

Jill's family and bandmates have released the following statement to BLABBERMOUTH.NET: "It is with a heavy heart that we announce that Jill Janus — frontwoman for the California heavy metal band HUNTRESS — passed away on Tuesday, August 14. A longtime sufferer of mental illness, she took her own life outside of Portland, Oregon. Janus spoke publicly about these challenges in hopes of guiding others to address and overcome their mental illness.

"Janus was a truly special creative involved with numerous musical projects including her role as vocalist for female metal/hard rock cover bands THE STARBREAKERS and CHELSEA GIRLS. In addition, Janus was co-composer and creator of an upcoming rock opera with TRANS-SIBERIAN ORCHESTRA's Angus Clark and had a decade-long career as NYC DJ Penelope Tuesdae. Her musical career began in childhood.

"Beyond her accomplishments in the music world and her advocacy for mental health issues, she was a beautiful person passionate about her family, animal rescue and the world of natural medicine. She will be missed more than she could have ever known.

"If you or someone you know might be at risk of suicide, call 1-800-273-8255 to reach the National Suicide Prevention Lifeline. It provides free and confidential support 24 hours a day, seven days a week for people in suicidal crisis or distress."

Janus has been open over the years about her battles with not only mental illness, in the form of bipolar disorder, schizophrenia, dissociative identity disorder and alcoholism, but also physical illness in the form of cancer.

Jill told Psychology Today in a 2015 interview that she attempted suicide for the first time at the age of 16 "with a pair of scissors. I was getting mandatory counseling at school but didn't see a psychiatrist until I was 20," she said. "I was then diagnosed manic-depressive and participated in a medical study at New York-Presbyterian Hospital in Manhattan."

Janus was eventually diagnosed with schizoaffective disorder, telling Psychology Today: "I've always seen and heard things others couldn't. Many visions or dreams would manifest into reality, which my family and friends described as my 'psychic ability.' This caused more drama at school, being called a 'freak' and getting beaten up. When I was 17, the visions and encounters with 'other-worldly creatures' was almost a daily occurrence."

In a Revolver interview, Janus described how the schizoaffective disorder evolved into full schizophrenia, which affected her in her 20s and continued until her death. She said: I was suicidal constantly. I was very suicidal early on in my life. Then in my mid-20s, it shifted to full-blown mania, where I can't really remember much of my 20s. I can't remember anybody from high school, either. I lost my long-term memory and can't remember names, faces, or even places. We'll be at a venue on tour and [HUNTRESS guitarist] Blake [Meahl] will be, like, 'We've played here two times before,' but I'll have no recollection."

Janus was diagnosed with uterine cancer in 2015 while HUNTRESS was working on its third album, "Static". She was eventually declared cancer-free after undergoing a hysterectomy.

"Static" was released in 2015 via Napalm Records.

According to PopCulture.com, a number of her musical peers have taken to social media to share their shock and sadness over Janus's death, with FIVE FINGER DEATH PUNCH bass player Chris Kael saying she had "SUCH a powerful voice matched with an equally beautiful personality," and former PRONG guitarist Monte Pittman writing that the news has left him, "speechless" and "shattered."