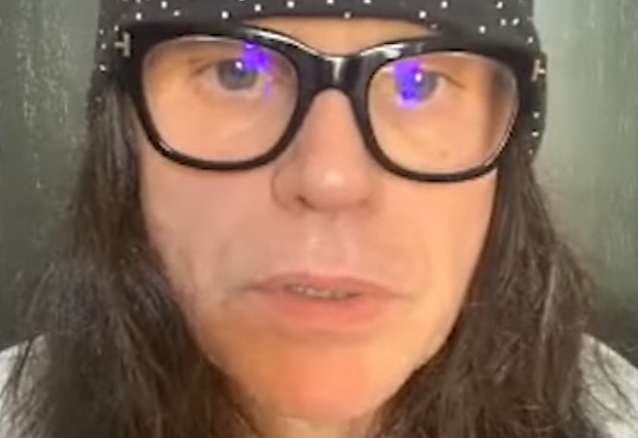 IAN ASTBURY Says No Recent Rock Albums Come Close To THE CULT's 'Under The Midnight Sun': 'Our New Record's Essential'

In a new interview with Germany's Rock Antenne, THE CULT frontman Ian Astbury was full of praise for the band's latest album, "Under The Midnight Sun", calling it "essential." He clarified: "If you're a fan of rock music, our new record's essential… I don't think there's any recent releases of rock music that come close to 'Under The Midnight Sun'. And to say that, it may sound like an arrogant statement, but I'm tired of this bullshit. Stop it. Stop phoning it in. Stop exploiting your fans. Stop patronizing your fans. And stop calling them fans. They're your benefactors. Our audience are our benefactors."

Astbury continued: "I have such incredible gratitude and respect to people who would actually pay their hard-earned money to walk through a door, buy a record, come to a show, buy a t-shirt. Are you kidding? I was one; I am one. I appreciate that. I appreciate them. And that's why we made this record, because we wanted it to be the best of the best of the best. It's a gift. Yeah, you've gotta pay for it. But I'm sorry, that's… it's society."

"Under The Midnight Sun" arrived on October 7 via Black Hill Records. The LP was produced by Tom Dalgety (PIXIES, GHOST, ROYAL BLOOD). Dalgety is the first British producer THE CULT has worked with since its second album, "Love" (1985).

Astbury previously spoke highly of "Under The Midnight Sun" this past July in an interview with Dayton Daily News. At the time, he said: "It is a different animal. It destroys 'Hidden City' and anything else we've done in quite a while. We dug deep and put a lot of blood, sweat and tears into this record.

"It's a brave new world out there and we want to be a part of it, but you don't get to be a part of it unless you're doing your best work," he added. "There are no free passes for anyone. You're only as good as what's happening today."

In a separate interview with the Los Angeles Daily News, Astbury stated about "Under The Midnight Sun": "This new album is a really honest, authentic depiction of where we are today. It's a very focused record and it's layered, it's dense, it's celebratory and it gets dark. There's a lot in this record. It's an amalgamation of THE CULT's major influences, the DNA of the band all culminating in a very special moment."

Born out of the ashes of the U.K. post-punk scene, THE CULT evolved to become one of the most influential and controversial rock bands of the late 20th century, selling millions of albums, headlining arenas and stadiums around the world, infusing innovative possibilities into the worlds of music and art, and quickly ascending through the ranks of the indie music world to achieve global status. THE CULT, whose music transformed from punk rock to post-punk, psychedelia, heavy dance music and transcendental hard rock, became one of the handful of important bands in the U.S. post-modern and hard rock communities, and was embraced by a generation that was waking up to the influence of 1960s and 1970s rock icons like LED ZEPPELIN, THE NEW YORK DOLLS and David Bowie.

The constant core of THE CULT is the "head and heart" of the band, Astbury and guitarist/composer Billy Duffy. Attitude incarnate, the chemistry between these two vastly different artists — equal parts genuine affection and palpable tension — remains the source of their long-standing partnership. Duffy grounds Astbury's esoteric side with a hard rock perspective, and there is no doubt that at all times, these two have each other's back. THE CULT's current lineup also includes former WHITE ZOMBIE, EXODUS and TESTAMENT drummer John Tempesta.